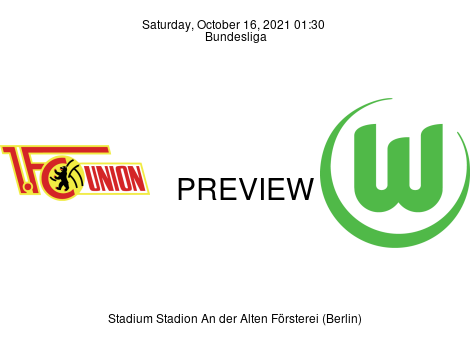 The German Bundesliga fixture, Union Berlin vs. VfL Wolfsburg, kicks off at 14:30 (GMT+1) on Saturday, October 16 at the Stadion An der Alten Försterei.

Preview Union Berlin utilized the international break to take part in a club-friendly match against the Swiss Super League side, FC St. Gallen. The Oct. 6 club-friendly match ended in a 3-1 defeat to the Swiss side. The defeat comes after Matchday 7’s 2-1 win over Mainz 05 at the MEWA Arena. Hushed celebrations followed after the 05ers established the lead minutes before the break through Marcus Ingvartsen (39’) who is currently on loan to Mainz from Union Berlin. However, a different Union Berlin emerged from the tunnel after the interval. Taiwo Awoniyi (69’) restored parity before bagging the brace four minutes later (73’) to hand Union the win. With back-to-back victories, WDLWW, Union remains in 7th place having picked up 12 points after 3W, 3D, & 1L. With Awoniyi's contribution, coupled with goals from the likes of Niko Gießelmann and Max Kruse, Union Berlin boasts of an average of 1.43 goals scored per game (10G, 7A), with Awoniyi having half of them to his name. Furthermore, the club has an average of 1.29 g.c.p.g., having conceded nine goals in seven appearances (9G, 7A), leaving Union with a G.D. of +1. Three at the back in the 3—4—1—2 formation, with the duo consisting of Taiwo Awoniyi and Max Kruse in attack, appears to be on the cards for Urs Fischer on Saturday when Union takes on Wolfsburg. Meanwhile, Timo Baumgartl (concussion) remains in doubt for this fixture.

Preview The fairytale start which had seen Wolfsburg go five games unbeaten appears to have come to an end for Mark van Bommel. After failing to pick up a point in back-to-back defeats (WWDLL), Wolfsburg slipped to 5th place on the Bundesliga table. Mark van Bommel’s side were only able to hit the back of the net once through Luca Waldschmidt (24’) in the 3-1 defeat to Borussia Monchengladbach on Matchday 7. Having 13 points from 4W, 1D, & 2L, a defeat to Union Berlin on Matchday 8 would see Wolfsburg slip out of the top-five. A look at the numbers reveals Die Wölfe has 9 goals after seven Bundesliga games, an average of 1.29 goals scored per game. The club has also conceded 8 goals (1.14 goals per match) and has a G.D. of +1. On Matchday 8, the 4—4—2 formation with Weghorst and Dodi Lukébakio is expected to face Union Berlin. For this game, Bialek (knee), Otavio (ankle), and Schlager (knee) are ruled out alongside William (knee) while Lacroix is suspended. Meanwhile, Mehmedi (muscular injury) remains in doubt for this game.