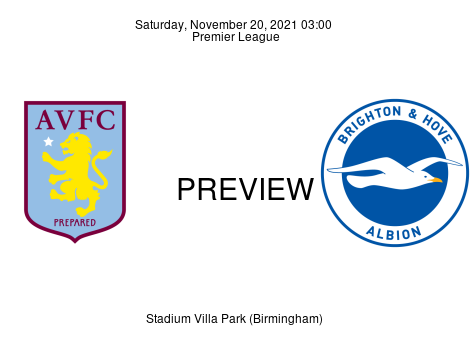 The Premier League clash between Aston Villa and Brighton & Hove Albion kicks off at 16:00 (GMT+1) on Saturday, November 20, at Villa Park. Referee Anthony Taylor will be in charge for the length of the game with help from the assistants, Gary Beswick and Adam Nunn. The fourth official, Stuart Attwell, will be on the sidelines while Peter Bankes will be the VAR.

Preview Aston Villa aims to restore their Premier League campaign back on track under new boss Steven Gerrard. The 41-year-old slipped into the coaching seat, replacing Dean Smith, who was axed following a run of five consecutive defeats: LLLLL. The Liverpool icon will be under the watchful eyes of onlookers as he makes his coaching debut in the Premier League this Saturday. Gerrard put pen to paper for a three-and-a-half-year contract designed to see him tame the Lions until June 2025. I am immensely proud to become Aston Villa’s new head coach, Gerrard said. On Saturday, he will aim for at least a point on his first day on the job as he looks to gradually steer Villa out of the bottom end of the Premier League table. Villa is in 16th place, with 10 points after 3W, 1D, & 7L. A remedy to the downward trend would require sorting out the defense, which has seen Villa concede as many as 20 goals this season. An average of 1.82 goals conceded per game. Citing examples from Arsenal (13G, 5th) and Spurs (9G, 9th), an average of 1.27 gpg, which leaves Villa with 14 goals, could see the club inside the top-ten with a disciplined back-line. In Gerrard’s last game in charge at Rangers [against Ross County], he adopted the attacking 4—3—3 formation and is expected to utilize the same shape for this game against Brighton. Ollie Watkins will be the focal point of Villa's attack once again. Danny Ings (coronavirus) remains in doubt for this fixture, along with Bertrand Traore.

Preview The Seagulls earned a 1-1 draw against Newcastle United right before the international break at Falmer Stadium, moving one spot ahead from 8th to 7th place on the Premier League table. Brighton has 17 points after 4W, 5D, & 2L. Despite having no victories in five Premier League games, DDLDD, Albion remains one of only three teams who are unbeaten away from home in the Premier League this season (2W & 3D). Graham Potter will aim for three points against Villa as he looks to make Gerrard’s first day on the job a miserable one. The Seagulls could line up with the 4—2—3—1 formation with Leandro Trossard in attack. Albion’s goalkeeper, Robert Sánchez picked up a red in the game against Newcastle and is suspended for this fixture.