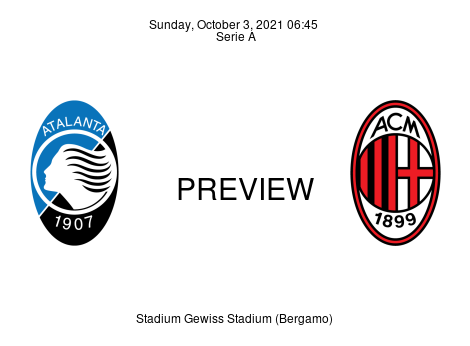 Preview Atalanta makes their return after a 1-0 win over BSC Young Boys in the UEFA Champions League. Following last weekend's 2-2 draw against Inter Milan, the club returns to Serie A with the form: DLWWD and in 7th place. Gian Piero Gasperini's side could move a few steps ahead on the table with a win over AC Milan on Matchday 7. However, since his reign began at the helm in the 2016/17 season, Gasperini has won just one of his five home league matches against AC Milan. But citing Atalanta's excellent performance against the Serie A champions, Inter Milan on Matchday 6, the 63-year-old will be on the hunt for a win. Atalanta has 11 points after 3W, 2D, & 1L, with an average of 1.33 goals per game, having scored 8 goals in 6 Serie A games. At their end, they have conceded 6 goals (an average of 1 goal conceded per game), and thus have a goal difference of +2. Gasperini's 3—4—2—1 formation will see the preferred striker of choice, Zapata, at the top of the shape. On injuries, Robin Gosens is ruled out for a month, while Rafael Toloi and Merih Demiral remain doubtful for this fixture.

Preview AC Milan picked up a 2-1 defeat to the Spanish side, Atletico Madrid, in the UEFA Champions League on Tuesday. Marred by poor officiating, Franck Kessie (R. 29') was shown the second yellow after what appeared to be a routine foul a minute short of the half-hour mark. Last weekend, in Serie A, Milan put Spezia away in a 2-1 win at the Alberto Picco. Pioli eyes a win after Tuesday's loss despite the spirited effort from his side despite the sending off. However, the 55-year-old remains aware of the task ahead. For this difficult game, Pioli's 4—2—3—1 formation will see Ante Rebic at the top of the design with Oliver Giroud tipped to make an off-the-bench appearance as he works towards 100% fitness. The Frenchman looked like a shadow of himself after coming on in the UCL game against ATM. The attacking trio of Alexis Saelemaekers, Brahim Diaz and Rafael Leao is expected behind Rebic. Kjaer is expected to make the return to the squad, while Junior Messias continues specialized training towards full fitness. Florenzi recently joined the treatment table and has been ruled out for a month after undergoing knee surgery. Zlatan (Achilles’ irritation) remains unavailable until after the international break alongside Tiemoue Bakayoko and Krunic.