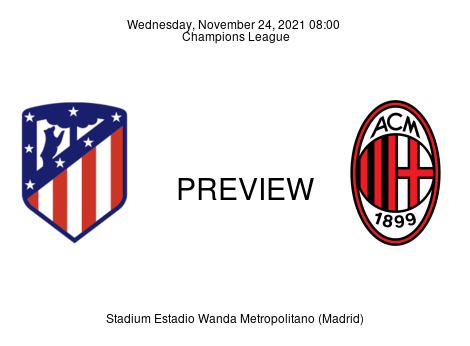 Atletico de Madrid will face AC Milan for the second time in the UEFA Champions League this season, following the 2-1 win over the Italians on UCL Matchday 2. This Group B fixture kicks off at 21:00 (GMT+1) on Wednesday, November 24, at the Estadio Wanda Metropolitano. Slavko Vinčić (SVN) has been given the nod to officiate this game for the length of ninety minutes plus extra time.

Preview Hanging in the balance, and within touching distance of a top-two finish, Atletico Madrid must pick up a victory to enhance their candidacy for a finish behind first-placed Liverpool who are already in the last-16. ATM are in 3rd place in Group B with 4 points, trailing behind second-placed FC Porto by a point, while having 1W, 1D, & 2L. On UCL MD4, ten-man Atletico Madrid picked up a 2-0 defeat to Liverpool. Diogo Jota’s header inside the first fifteen minutes had Liverpool in the lead, before Sadio Mane (21’) doubled the advantage. Things went from bad to worse for Diego Simeone’s side after Felipe (36’) was sent packing for a cynical foul on Mane. A barrage of attacks continued as fatigue and the numerical disadvantage began to tell on Atletico Madrid. Over the weekend, the Spanish outfit picked up a narrow 1-0 win over Osasuna in LaLiga and were left with a form that reads: DWLDW. Diego Simeone continues to rotate shape and personnel with emphasis on the occasion. However, we could see the 3—4—2—1 formation, with Luis Suarez in attack against Milan. Felipe is suspended along with Griezmann (subject to appeal), while João Félix, Kondogbia, and Suárez will share the same status if they get booked on Wednesday.

Preview Having only a point in Group B and a G.D. of -3, AC Milan must win to stay in contention for the round of 16 or a spot in the UEFA Europa League. However, Milan will not finish in the top two regardless of their own result if FC Porto wins at Liverpool. Milan sits at the bottom of the group, without a victory after four games: 0W, 1D, & 3L. The Italians saw their season-long unbeaten run on the domestic front halted by Fiorentina in Saturday’s 4-3 defeat, leaving Milan with their first loss in five games across all competitions: WWDDL. Pioli is tipped to start with the 4—2—3—1 formation, leaving Zlatan at the top of the shape. Olivier Giroud could come in to replace the 40-year-old or could play alongside the Swede during the latter stages of the game. Tomori failed to feature in the weekend defeat to the Purples and is ruled out for this fixture, along with Ante Rebic (hamstring). Davide Calabria is also ruled out, while Ante Rebic (hamstring) and Samu Castillejo are expected back in the squad next month.