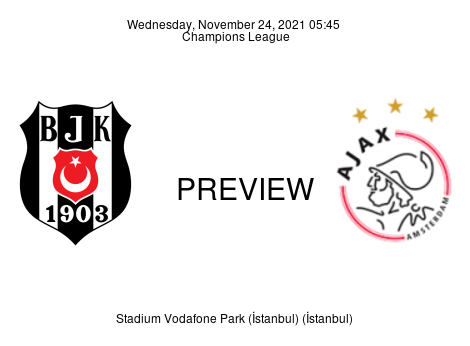 The UEFA Champions League Group C fixture, Beşiktaş JK vs. AFC Ajax, kicks off at 18:45 (GMT+1) on UCL Matchday 5, Wednesday, November 24, at the Vodafone Arena. Referee Irfan Peljto (BIH) will be in charge for this game, with the help of the assistant referees, Senad Ibrisimbegović (BIH) and Davor Beljo (BIH). Marco Guida (ITA) will be the Video Assistant Referee. Following a 2-0 defeat to Ajax on UCL MD 2, Beşiktaş renews its rivalry with the Dutch club.

Preview The Turkish side is back on European soil after the 2-0 defeat to Alanyaspor in the Turkish Super Lig on Saturday, leaving them with their fourth defeat in five games across all competitions: LLLWL. Out of contention for a top-two finish, Beşiktaş must pick up a win against Ajax on Wednesday to vie for a place in the UEFA Europa League. The Turkish outfit picked up an embarrassing 4-0 defeat to Sporting CP at the Estádio José Alvalade on UCL MD4. The defeat leaves the Black Eagles at the bottom of Group C, having no points but a massive G.D. of -10 after 0W, 0D, & 4L. A poor record in Europe leaves Beşiktaş with only one victory in their last eight games on home soil (1W, 1D, & 6L). Beşiktaş is one of the only two clubs yet to pick up a point in the UEFA Champions League group stage this season, along with the Swedish champions, Malmö FF, in Group H. Sergen Yalçin alternates between the 4—3—3 and the 4—1—4—1 formation and could use either on Wednesday. In either case, Kenan Karaman will be serving as the focal point in attack, with the availability of Michy Batshuayi shrouded in mystery. In addition, Josef de Souza is suspended for this fixture.

Preview In Sunday's fixture [Eredivisie], AFC Ajax smashed RKC Waalwijk to bits and pieces in a 5-0 win. Having secured a last-16 berth in the Champions League, Ajax have now set their sights on a first-place finish in Group C, and need a win over Beşiktaş on Wednesday to achieve that feat. Having defeated ten-man Dortmund on Matchday 4, 3-1, Ajax has 12 points after four victories in four UCL games: 4W, 0D, & 0L. Ajax has picked up nine victories in 11 games against Turkish sides, and Erik ten Hag aims to maintain the impressive record for Ajax. The 51-year-old could do with the 4—2—3—1 formation, leaving Sébastien Haller in attack against Beşiktaş. Sean Klaiber remains doubtful, while Maarten Stekelenburg (hip injury) is ruled out for the season. Mohammed Kudus' availability also remains uncertain. Furthermore, Edson Álvarez is suspended, and Jurrien Timber will be suspended for the next match if he is booked against Beşiktaş.