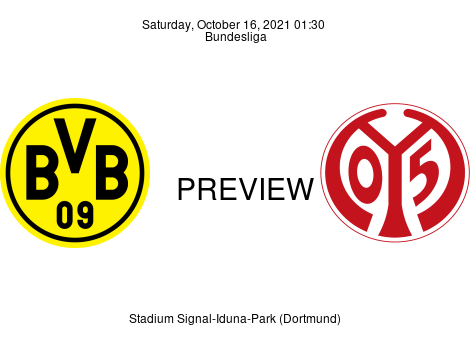 The fixture between the Black & Yellows and the 05ers ushers in another weekend of Bundesliga action after 63 games and 192 goals. Bayern Munich remains at the top of the league table while the newcomers, Greuther Fürth, stay at the bottom. Erling Haaland and Robert Lewandowski share the top spot on the goal scorers’ chart with 7 goals apiece while Leverkusen’s Florian Wirtz has the highest number of assists, 5. Meanwhile, Mainz’s goalkeeper Robin Zentner holds the league to ransom with 4 clean sheets. Dortmund vs. FSV Mainz 05 kicks off at 14:30 (GMT+1) on Saturday, October 16, at Signal Iduna Park.

Preview Before the international break, Dortmund picked up a 2-1 win over Augsburg on home soil. Raphael Guerreiro (10' P.) put the home side in front from the penalty spot following a foul on Donyell Malen. Five minutes after the half-hour mark, Andi Zeqiri (35') restored parity until both sides walked off at the break, leaving 40,000 fans behind. Julian Brandt (51') scored the second for Dortmund, nine minutes short of the hour mark, leaving Augsburg without a way back. The victory was the fourth of its kind for Dortmund in five Bundesliga games: WWWLW, leaving Dortmund in 3rd place with 15 points after 5W, 0D, & 2L. It was a fine way to respond after Matchday 6’s defeat to Borussia Monchengladbach. Being a point adrift of first-placed Bayern Munich and second-placed Bayer Leverkusen, a win for Marco Rose’s side would present a fine opportunity to move to at least 2nd place on the Bundesliga table. Bayern Munich takes on Leverkusen on Sunday and a draw between the two sides could see Dortmund leap to the top of the table. Taking a look at the numbers, Dortmund have the scales leaning in their favor. The club boasts an average of 2.71 goals per game (19G, 7A) against Mainz’s average of 1 goal per game (7G, 7A). However, the club has conceded 13 goals and has a goal difference of +6. An average of 1.86 goals conceded per game, while the 05ers have a lower average of 0.71 g.c.p.g. On Saturday, Marco Rose will aim for a victory when he lines up the 4—2—3—1 formation with Erling Haaland in attack. On availability, Dahoud (knee), Guerreiro (muscular), and Morey (knee) are all ruled out alongside Moukoko (muscular). Meanwhile, Akanji (groin), Reyna (thigh), and Schmelzer (knee) remain in doubt.

Preview The 05ers are in 9th place with 10 points from 3W, 1D, & 3L. They return to Bundesliga action after back-to-back defeats, WWDLL, having lost to Union Berlin, 2-1, on Matchday 7 at the MEWA Arena. A draw for Bo Svensson’s side would be a fine result considering Dortmund’s remarkable form. The familiar 3—4—2—1 formation from the 42-year-old Svensson could see Karim Onisiwo in attack once again. Yet to hit the back of the net, the 29-year-old has 2 assists to his name and could find the third on Saturday.