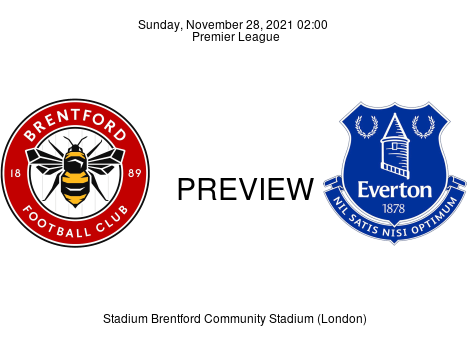 The Premier League fixture, Brentford FC vs. Everton FC, kicks off at 15:00 (GMT+1) on Sunday, November 28, at the Brentford Community Stadium. For the length of the game, referee Darren England will have the assistants, Constantine Hatzidakis and Peter Kirkup, lend a hand. John Brooks, the fourth official, will be in communication from the sidelines, while Jonathan Moss will be the VAR.

Preview The Bees were denied a victory at St. James’ Park after picking up just a point in the six-goal thriller which ended in a 3-3 draw against Newcastle United. Goals from Ivan Toney (11'), Rico Henry (31'), and an own goal from Jamaal Lascelles (61' O.G.) were not enough to see the Bees pick up their fourth victory of the season. - As Allan Saint-Maximin (75') struck for the equalizer with fifteen minutes left on the clock. Brentford remains without a win in five Premier League games: LLLLD. The club is in 14th place, with 13 points after 3W, 4D, & 5L. Having last tasted victory in the 2-1 win over West Ham on Oct. 3, Thomas Frank continues in search of his fourth win of the season in a bid to reverse the downward trend after starting on a high note. On the numbers, Brentford has a goal ratio of 1.33 g.p.g. this season, with 16 goals in twelve Premier League games. The Bees have also conceded 17 goals (an average of 1.42 goals conceded per game) and are left with a G.D. of -1. No side has conceded more Premier League goals in the first half of matches this season than Brentford, with 11, 65% of the total haul conceded. A 3—5—2 formation with Ivan Toney and Bryan Mbeumo is expected in attack once again. Mathias Jensen (COVID-19) is ruled out of this fixture along with an exhaustive list of names on the injury sheet.

Preview The Toffees were swept aside by Manchester City in a 3-0 defeat to the Cityzens on Matchday 12. Goals from Raheem Sterling (44'), Rodri (55'), and Bernardo Silva (86') settled the one-sided affair of ninety minutes. The embarrassing loss left Everton in 11th place and also without a win in five games, LLLDL, having picked up only 15 points from 4W, 3D, & 5L. With the big stick already wielded across seven Premier League clubs this season, Rafael Benítez will be sitting tight when he slips into the managerial seat on Sunday. This is the first meeting between Brentford and Everton in any competition in over a decade. The Toffees have won five of their last six Premier League matches in London (5W, 0D, & 1L), and a much-needed win would calm nerves. A 4—4—1—1 formation with Salomón Rondón in attack is expected on Sunday. Mason Holgate and Richarlison are suspended, joining the long list of absentees for this fixture against Brentford.