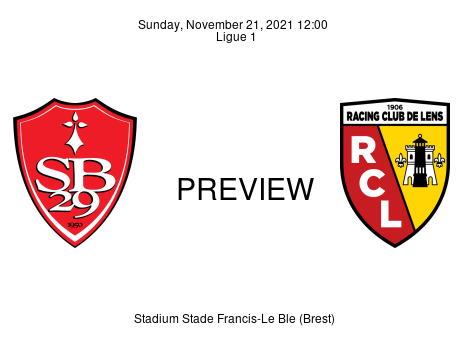 Preview Brest picked up a 2-1 win over ten-men Lorient at the Stade du Moustoir with 14,649 in attendance. The Nigerian international, Terem Moffi, proved to be too quick and too tricky as he found Grbic (5') inside the box after doing all the hard work to see Lorient end up with the lead. Lorient looked like the side that would eventually bag three points until a red card was shown to Jérôme Hergault (R. 28'), which left the home side with a numerical disadvantage. A VAR-assisted penalty saw Romain Faivre (58' P.) level the score-line from 12 yards before Steve Mounie (80') tucked the ball away for the winner. Remaining undefeated in four games and with back-to-back victories, LDDWW, Brest are in 17th place, having picked up 12 points after 2W, 6D, & 5L. The club has a goal ratio of 1.23 goals per game this season, having scored 16 goals in 13 Ligue 1 games. They have also conceded 21 goals and have a G.D. of -5. An average of 1.62 goals conceded per game. The pause in action lets us regenerate well, Michel Der Zakarian said ahead of Sunday’s game. We left the relegation zone and there looks to be light at the end of the tunnel, which feels good, he added. But we have to keep winning now if we're going to save ourselves, the Brest boss concluded. Two center-backs, Brendan Chardonnet (groin) and Denys Bain (thigh), are ruled out, while Christophe Hérelle is expected back in the squad having returned to full fitness. A 4—4—2 formation against Lens is expected, with Jérémy Le Douaron and Steve Mounié in attack.

Preview RC Lens look to strengthen their grip on 2nd place at the end of the weekend with a win over Brest. In their last match before the break, Lens picked Troyes apart in a 4-0 win at the Stade Bollaert-Delelis. Lens trails first-placed PSG by 10 points, while having 24 points after 7W, 3D, & 3L. The club has a form that reads: WLWLW ahead of this fixture against Brest. With the burden of scoring shared throughout the squad this season, Lens has 25 goals after 13 Ligue 1 games. A goal ratio of 1.92 goals scored per game. In addition, le Sang et Or have conceded 14 goals (an average of 1.08 goals per match) so far this season, and have a G.D. of +11. Franck Haise could appear along with Lens, adopting the 3—4—1—2 formation having Arnaud Kalimuendo and Wesley Saïd in attack.