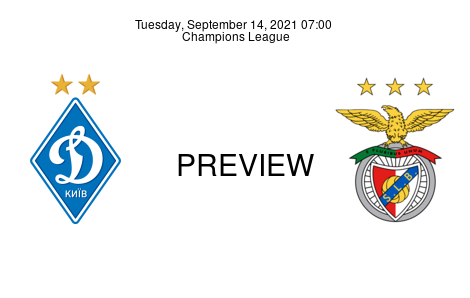 The UEFA Champions League Group E fixture, Dynamo Kyiv vs. S.L. Benfica, kicks off at 20:00 (GMT+1) on Tuesday, September 14 at the NSC Olimpiyskiy. English referee, Anthony Taylor, will be the man in the middle for this fixture, while Gary Beswick (ENG) and Adam Nunn (ENG) will be assisting. Chris Kavanagh (ENG) will be the VAR.

Preview Dynamo Kyiv will make their 18th UEFA Champions League group appearance into the contest of champions after Saturday’s 2-0 victory over Metalist 1925 in the Ukrainian Premier League. The club enjoys domestic dominance, sitting at the top of the league table in first place after seven games. Dynamo Kyiv have won all but one in their last five games across all competitions: LDWWW. However, the Ukrainian side will be up for a much more difficult task in the UEFA Champions League. The club shares Group E with Barcelona, Bayern Munich and SL Benfica. A victory over Benfica on Tuesday would put them on the front-foot ahead of the difficult fixtures scheduled for Matchday 2 & 3. Manager Mircea Lucescu could utilize the 4—4—1—1 formation with Ilia Shkurin in attack for the Ukrainian outfit. Riddled with injuries, the club could be without as many as five players for this game against Benfica. Ibrahim Kargbo, Vladyslav Kulach, Eric Ramirez, and Artem Besyedin have all been ruled out, while Denys Popov faces a long spell on the sidelines having gone under the knife for a cruciate rupture.

Preview The Portuguese side, S.L. Benfica, picked Santa Clara to pieces in the Portuguese Primeira Liga over the weekend. The club sits at the top of the league, in 1st place following Saturday’s 5-0 win over Santa Clara having played five league games. They remain unbeaten in five games across all competitions: WWDWW, while having five consecutive victories: WWWWW in the Portuguese League. Manager Jorge Jesus will have a similar plan to pick up three points on Tuesday ahead of the difficult upcoming games against the Spanish giants, Barcelona, and the German champions, Bayern Munich. Known to be attacking minded, Jorge Jesus could line up with three at the back against the Ukrainian outfit, Dynamo Kyiv, in a 3—4—3 formation, with Rodrigo Pinho playing in the middle of the attack. Pinho could be flanked on the right by Éverton and on the left by Darwin Núñez. With the exception of Ferro, who is sidelined with a muscular injury, Jorge Jesus will have a fully fit squad for his selection for the game against Dynamo Kyiv.