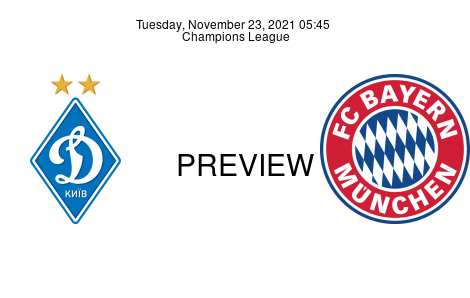 Dynamo Kyiv returns on UEFA Champions League Matchday 5, in search of a win to remain in contention for a spot to keep playing European football this term. This early kick-off Group E fixture, Dynamo Kyiv vs. F.C. Bayern Munich, is slated for 18:45 (GMT+1) on Tuesday, November 23 at NSC Olimpiyskiy.

Preview Over the weekend, the side from Kyiv picked up a 6-1 win over FC Chornomorets Odesa in the Ukrainian Premier League. Despite the contrasting run of form in the star-studded arena of champions, Dynamo Kyiv enjoys domestic dominance, sitting at the top of the league table in first place after fifteen games. The Ukrainian outfit has three victories in their last five games across all competitions: WWLLW, and look to pick up their very first win in this tournament on Tuesday, having lost to Barcelona by a lone goal on UCL MD4. Kyiv had denied Barcelona the lead on a number of occasions until Ansu Fati (70’) broke the deadlock with a remarkable volley from twelve yards. The defeat left Kyiv at the bottom of Group E with only a point and a massive goal difference of -7 after 0W, 1D, & 3L. Yet to score, Mircea Lucescu’s side is up against the wall and in search of an unlikely win against the five-time UEFA Champions League winner, Bayern Munich. Lucescu, 76, could line up the 4—2—3—1 formation with Ilya Shkurin in attack. Riddled with injuries, the club could be without as many as five players for this game. Ibrahim Kargbo, Vladyslav Supriaga, and Artem Besyedin are in doubt, along with Vladyslav Kulach, while Denys Popov is ruled out. In addition, Denys Garmash will miss the next match if he is booked on Tuesday.

Preview Bayern Munich suffered a shock 2-1 defeat at the hands of Augsburg on Friday and look to get back to winning ways on European soil, where they remain unbeaten. Die Roten are at the top of Group E, with the qualification for the knock-out stage already in the bag following the 5-2 win over Benfica on UCL MD4. Bayern has 12 points and an impressive G.D. of +15 after scoring 17 times and conceding twice in four UCL games: 4W, 0D, & 0L. With the title of being the club with the highest number of goals hanging around their neck, the Germans have three victories in five games across all competitions: LWWWL. Nagelsmann could give a few unfamiliar faces valuable Champions League playing time on Tuesday in his famous 4—2—3—1 formation, having secured a last-16 berth. However, Robert Lewandowski is expected to keep his place as he continues his hunt to smash more numerical milestones. Following his hat-trick against Benfica on Matchday 4 – his 100th UCL appearance – the Pole became the competition's top scorer this season with eight goals, while having a total haul of 81 UCL goals. Upamecano is suspended, while Lucas Hernández will miss the next match if he is booked on Tuesday.