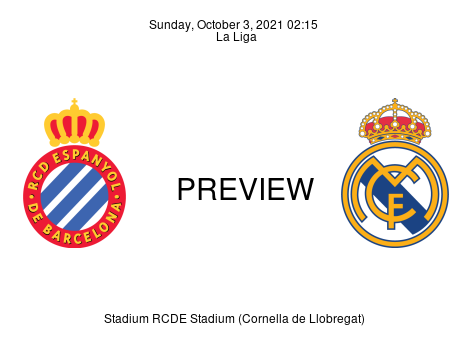 The Spanish LaLiga Santander fixture, Espanyol de Barcelona vs. Real Madrid, kicks off at 15:15 (GMT+1) on Matchday 8, Sunday, October 3 at the RCDE Stadium.

Preview Playing no part in European continental football, Espanyol will make their return after last weekend's away defeat to Sevilla. Despite having 46% of the ball and making 396 passes, Espanyol failed to create anything noteworthy in terms of results and lost, 2-0 to Sevilla at the Ramón Sánchez Pizjuán on Matchday 7. Goals from Youssef En-Nesyri (13') and Rafa Mir (87') were enough to decide the outcome of the game after ninety minutes of play. With Madrid looming, Vicente Moreno was aware of the consequences of the defeat, knowing his side would face an uphill task against Los Blancos on Sunday afternoon. With only one win in the last five games: LLDWL, which also doubles as the club's only victory this season, Espanyol remains in 14th place, having picked up 6 points after 1W, 3D, & 3L. The results are evident in the numbers, as a closer look reveals a lack of goals in the final-third. Betrayed by an average goal ratio of 0.57 goals per game, having scored 4 goals in 7 LaLiga games, Espanyol's attacking department requires at least two games to pick up a goal, an average not good enough when put side-by-side with Madrid's 3 goals per game. A closer look also shows that Espanyol concedes less on the average when compared to Madrid's 1.14 g.c.p.g. while having 1 g.c.p.g after letting eight goals in, in seven appearances. Taking away other factors, an improved average conversion rate in the final third could see Espanyol inside the top-ten, to say the least. Moreno would try to do that on Sunday with a probable 4—1—4—1 formation, while having Raúl de Tomás at the top of the shape.

Preview Real Madrid sit at the very top of the LaLiga table, having picked up 17 points from 5W, 2D, & 0L. They return to LaLiga action having been shocked by Sheriff Tiraspol in Tuesday's UEFA Champions League 2-1 loss. The team played well, Carlo Ancelotti said in his presser, right after the defeat to Tiraspol. We could have been sharper in the area, but it's difficult to explain what happened, he added. Following last weekend's barren draw against Villarreal, the club has the form: WWWWD and remains unbeaten on the home front. Madrid is the league's highest scoring side with 21 goals after 7 LaLiga games, leaving Los Blancos with a G.D. of +13 having conceded only 8 goals this season. A 4—3—3 formation with Karim Benzema in the middle, flanked by Hazard and Vinicius Junior, is expected against Espanyol. Gareth Bale (knee injury), Dani Ceballos (ankle injury), and Marcelo are all possible absentees for Real Madrid. Daniel Carvajal remains sidelined with a calf injury alongside Ferland Mendy (muscle injury). Both players are expected to return after the international break.