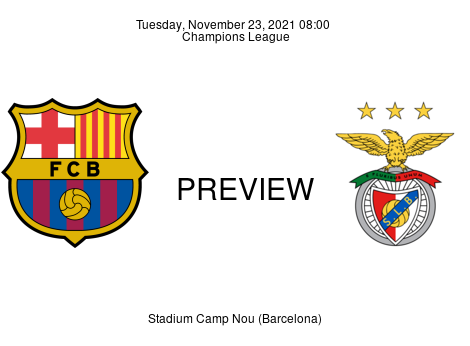 The UEFA Champions League Group E fixture, F.C. Barcelona vs. S.L. Benfica, kicks off at 21:00 (GMT+1) on Tuesday, November 23, at Camp Nou. Referee Sergei Karasev (RUS) will be in charge, with help of the assistant referees, Igor Demeshko (RUS) and Maksim Gavrilin (RUS). Fourth official Kirill Levnikov (RUS) will be on the sidelines while Massimiliano Irrati (ITA) will be the Video Assistant Referee.

Preview Xavi enjoyed a debut victory at the helm with Barcelona over the weekend, having defeated Espanyol by a lone goal. Memphis Depay (48’ P.) struck from the penalty spot for the only goal of the game, three minutes into the second forty-five. On UCL Matchday 4, Barcelona picked up another narrow victory, defeating Dynamo Kyiv by a lone goal. The Ukrainian outfit had denied Barcelona the lead on a number of occasions until Ansu Fati (70’) broke the deadlock with a fabulous volley from twelve yards. The victory left Barcelona with 6 points after 2W, 0D, & 2L, and within touching distance of the last-16. With a win over Benfica on Tuesday, Barcelona will be assured of a place in the knockout stage. The Blaugrana are unbeaten in four games, LDWDW across all competitions, and new boss Xavi, who will be making his coaching debut in the UEFA Champions League on Tuesday, will be on the hunt for three points. The iconic midfielder selected the 4—3—3 formation with the attack consisting of Memphis Depay, Gavi, and Ilias Akhomach Chakkour for the weekend game against Espanyol. A similar shape is expected on Tuesday, with a change or two to the attacking personnel. For Tuesday's match, Barcelona will be without Sergio Aguero (heart problems), while Martin Braithwaite continues to recuperate from knee surgery. Sergino Dest (lumbago) remains in doubt, while Ansu Fati is expected back in early December alongside Nico González.

Preview S.L. Benfica defeated F.C. Paços de Ferreira, 4-1, in Friday's Taça de Portugal fixture and will be returning to European soil with back-to-back victories in five games across all competitions: DDLWW. On UCL MD4, the Portuguese outfit picked up an embarrassing 5-2 defeat to the five-time UEFA Champions League winner, Bayern Munich. A defeat to Barcelona on Tuesday would see them miss out completely on a place in the last-16. The Eagles are in 3rd place in Group E with 4 points after 1W, 1D, & 2L. On the shape, three at the back is expected once again from the 67-year-old Jorge Jesus, fashioned into the 3—4—3 formation with Roman Yaremchuk or Haris Seferovic spearheading the attack. Éverton and Rafa Silva are expected to be part of the attack. Meanwhile, Joao Mario (lumbago) remains in doubt for this fixture alongside Rodrigo Pinho and Lucas Verissimo (knee injury).