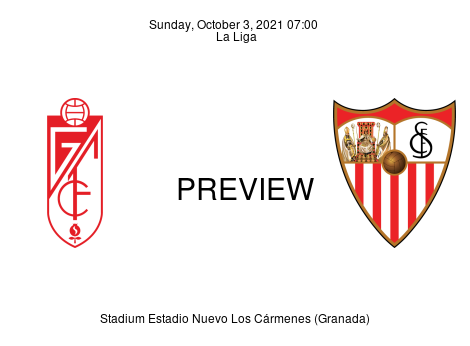 The LaLiga Santander fixture, Granada CF vs. Sevilla FC, kicks off at 20:00 (GMT+1) on Sunday, October 3, at Los Cármenes.

Preview Granada lost to Celta Vigo, 1-0, on Monday, the 27th of September at the Balaidos. Both sides appeared to have settled for a goalless draw, but a last-gasp effort from Vigo's Denis Suarez (90+4') eventually separated both teams at the death. The defeat leaves Granada inside the bottom three, in 18th place, alongside Alaves in 19th and Getafe at the bottom rung of the ladder, and without a point. Granada are without a win in the league and have only 3 points after seven games: 0W, 3D, & 4L. They return having suffered back-to-back defeats, LLDLL, and in search of three points in a bid to escape the troubled waters at the bottom end of the table. On Sunday, Robert Moreno could go along with the 4—4—2 formation with the 23-year-old, lesser-known Luis Suarez on the left of attack working alongside Carlos Bacca on the right. On the injury list, Granada have center-back Neyder Lozano (head injury) and Yan Eteki (muscle injury). Both players are ruled out of this fixture.

Preview Sevilla picked up a 1-1 draw against VfL Wolfsburg in Wednesday's UEFA Champions League fixture at the Volkswagen Arena. The draw comes after Sevilla's 2-0 win over Espanyol de Barcelona last weekend. Espanyol's Raul de Tomas had fired inches above the crossbar before Youssef En-Nesyri (13') established the lead for Sevilla. Five minutes over the hour mark, Thomas Delaney (R. 65) earned a second yellow, - sent off for dissent after sarcastically applauding the first official's decision to book him. Three minutes before full-time, Rafa Mir (87') struck for the second to put the game beyond the reach of Espanyol. The victory leaves Sevilla in 3rd place with 14 points after 4W, 2D & 0L. With a game in hand, Sevilla are unbeaten in five games, WDDWW, while having a G.D. of +8 after six games. Sevilla had the game against Barcelona postponed to a later date, citing congestion in the calendar which saw international duties clashing with league functions and European commitments. Julen Lopetegui will fancy a win against Granada on Sunday when he lines up the probable 4—3—3 formation. The trio consisting of Rafa Mir, Suso, and Ocampos is expected in attack. Erik Lamela and En-Nesyri are the club's top scorers with three goals apiece and both players aim to add to the tally on Sunday. Thomas Delaney is suspended for this game, having picked up the red against Espanyol.