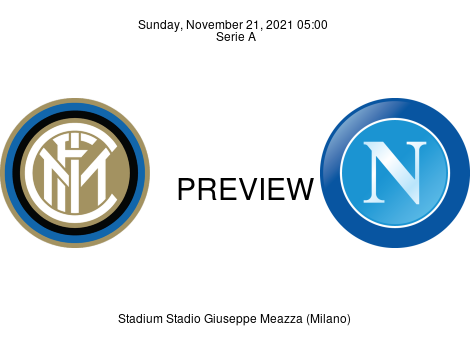 The highly-anticipated Serie A TIM fixture between Inter Milan and S.S.C. Napoli kicks off at 18:00 (GMT+1) on Sunday, November 21, at the San Siro.

Preview Inter Milan picked up a 1-1 draw in the Derby della Madonnina right before the break. In the presence of 56,608 spectators, Hakan Calhanoglu (11' P.) put Inter Milan in front from the penalty spot before an own goal from Stefan De Vrij (17' O.G.) chalked off the lead and saw parity restored at San Siro. The draw left Inter undefeated in four Serie A games: LDWWD, as they tightened their grip on 3rd place. Inter trails Napoli and Milan by 7 points while having 25 points after 7W, 4D, & 1L. The club returns after the break with an average goal ratio of 2.42 g.p.g. this season, having scored 29 goals in 12 Serie A appearances. The Serie A champions have also conceded 13 goals and have a goal difference of +16. An average of 1.08 goals conceded per game. After a strong start to the season, Simone Inzaghi’s side appear to be playing catch-up. Evidently, the cutting edge in attack appears to be blunt. After bagging nine goals, five for the Bosnian Diamond and four for the Argentine in Serie A between Sept. and the Oct. international break [five games], Inter’s duo of Edin Dzeko and Lautaro Martínez have only scored one goal in five league games. However, the attacking duo is expected from the get-go once again for this game against Napoli in Inter’s 3—5—2. Alexis Sanchez (hamstring) is ruled out for this fixture alongside Stefan de Vrij (hamstring).

Preview Napoli picked up a 1-1 draw against the stubborn ten-men from Hellas Verona at the Stadio San Paolo with 18,299 in attendance. Simeone (13') had extended his remarkable goal-scoring run inside the opening fifteen minutes to leave Verona with the lead. However, Di Lorenzo (18') struck for the leveler five minutes later, restoring parity until the final whistle. Napoli remains at the top of the table with 32 points from 10W, 2D, & 0L, unbeaten over the course of the season while picking up 11 points from their last five games: WDWWD. The club is also unbeaten in their last 21 league games (16W & 5D), having picked up their last defeat back in April 2021 [vs. Juventus]. Despite the impeccable record, I Partenopei haven’t scored in their last four away Serie A games against Inter Milan. On Sunday, the former Inter Milan coach, Luciano Spalletti, will aim to break the jinx. The 62-year-old could appear with the famous 4—2—3—1 formation against Inter, which could see the Nigerian international, Osimhen, in attack once again. Diego Demme (coronavirus) is ruled out of this fixture.