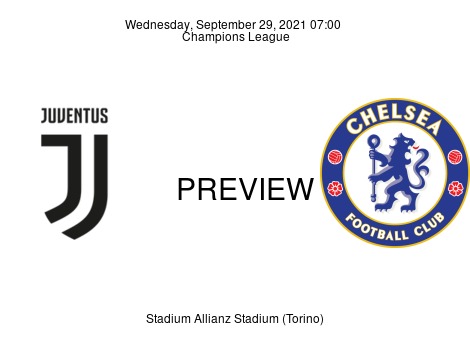 In one of the most anticipated fixtures of UEFA Champions League Matchday 2, alongside PSG vs. Manchester City, Juventus takes on Chelsea in a Group H encounter scheduled for 20:00 (GMT+1) on Wednesday, September 29 at the Allianz Stadium. Jesús Gil Manzano (ESP) will be in charge, while Diego Barbero (ESP) and Ángel Nevado (ESP) will be assisting. Juan Munuera (ESP) will serve as the VAR.

Preview After sweeping Malmö FF aside with a 3-0 win on UEFA Champions League Matchday 1, the Old Lady returns for the toughest test, yet, in the 67th edition of Europe’s premier club football tournament on Wednesday when they face the Blues. After a sluggish start to the season, a resurgent Juventus defeated a stubborn Sampdoria 3-2 over the weekend. It was a costly defeat which saw the Killer Lady lose both Alvaro Morata and Paulo Dybala to thigh injuries. Both arrived at the J. Medical facility on Monday morning to undergo medical examinations. With the results, it was revealed that Morata would be out of action for over a month, while Paulo Dybala could make an earlier return. Following the victory over La Samp, Juventus now has three wins in five games across all competitions: LWDWW. Juve sits at the top of Group H with three points and a G.D. of +3 after the victory over Malmö: 1W, 0D & 0L. With fewer options in attack, Allegri will face an uphill task in his quest to subdue the UEFA Champions League title holders, Chelsea, on Wednesday. However, the shape: 4—4—2 would likely remain with the duo consisting of Morata and Dybala replaced by Moise Kean and Dejan Kulusevski. Juventus last faced a Premier League side in the 2018/19 edition of the UCL group stage, picking up a 1-0 win over Manchester United before a 2-1 defeat on home soil. The loss ended Juve's nine-match (W5, D4, & 1L) unbeaten run against English sides. On availability, Juventus will be without Arthur, while Adrien Rabiot remains in doubt. On UCL Matchday 3, Oct. 20, Juventus will travel to the Krestovsky Stadium to take on FC Zenit.

Preview Chelsea lost to Manchester City by a lone goal over the weekend in the Premier League. The loss was their first in five games across all competitions: WWWDL. On UCL Matchday 1, the Blues defeated Zenit St. Petersburg, 1-0, courtesy of a single goal by Romelu Lukaku (69’). The victory leaves Chelsea in 2nd place in Group H while having 3 points and a G.D. of +1. Chelsea’s record on the road to Italian teams is 1W, 3D, & 6L, which includes four consecutive defeats in the last four trips. On Wednesday, a 3—4—2—1 formation with Lukaku at the top of the design is expected from Thomas Tuchel. James has been ruled out of this fixture after he was subbed off in the game against City on Saturday. Chelsea could also be without Pulišić (ankle injury) and Mason Mount for this game. Looking ahead, Chelsea will welcome Malmö FF to Stamford Bridge on UCL Matchday 3, Oct. 20.