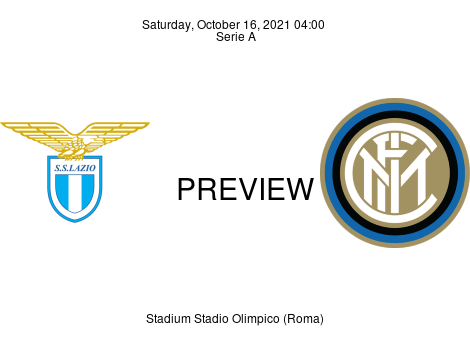 The Serie A TIM fixture, S.S. Lazio vs. Inter Milan, ushers in another fine weekend of Italian top-flight football. After 70 games and a total of 224 goals, Edin Džeko and Ciro Immobile share the top spot on the goal scorers’ list with 6 goals apiece. Nicolò Barella has the most assists after seven league days with 5, while Milan’s goalkeeper, Mike Maignan, and Bologna’s Łukasz Skorupski have the highest number of clean sheets, 3 each. Napoli sits at the top of the Serie A table while Cagliari remains at the bottom. Being one of the most anticipated fixtures of Matchday 8, the game kicks off at 17:00 (GMT+1) on Saturday, October 16, at the Stadio Olimpico.

Preview Following the shock 3-0 defeat to Bologna on Matchday 7, Lazio slipped to 6th place while having only one victory in five Serie A games: LDDWL. The club has 11 points after 3W, 2D, & 2L. Maurizio Sarri could settle for a draw on Saturday, knowing the Serie A champions have remained unbeaten since the turn of the new season. With an average of 2.14 goals scored per game (15G, 7A), Lazio could be hitting the back of the net at least once in this game against Inter. However, the defense may present a challenge. Lazio has conceded 12 goals, an average of 1.71 goals per game, after seven games, leaving the Eagles with a G.D. of +3. Maurizio Sarri’s 4—3—3 formation could see Ciro Immobile return to the starting line-up after being left out in the game against Bologna due to a thigh injury. Meanwhile, Francesco Acerbi is suspended for this game, following the red card he picked up against Bologna on Matchday 7.

Preview The Serie A champions are third on the table after a 2-1 win over Sassuolo on Matchday 7. Lautaro Martinez (78’ P.) decided the outcome of the game from the penalty spot minutes after Dzeko (58’) struck for the equalizer. Inter have 17 points and are unbeaten this season (5W, 2D, & 0L), while having three victories in five Serie A games: DWWDW. Citing the remarkable form, Inter shouldn’t have any problems picking up three points on Saturday. A haul of 22 goals (3.14 g.c.p.g) after just seven Serie A games speaks volumes about Inter’s performance in the final third. The club has the highest number of goals in the league. Meanwhile, I Nerazzurri have conceded 8 goals so far and have a G.D. of +14. Simone Inzaghi could emerge alongside Inter with the familiar 3—5—2 formation. The dynamic duo consisting of Edin Dzeko and Lautaro Martinez in attack is expected once again. Stefano Sensi is ruled out alongside Christian Eriksen, who remains ineligible to play due to a heart condition.