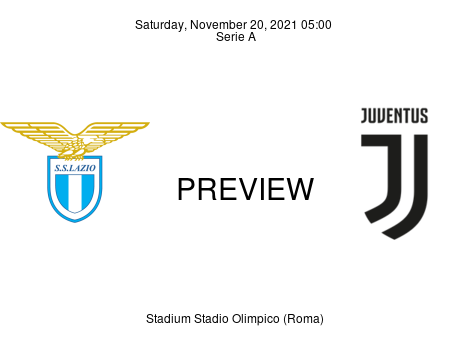 The Italian Serie A resumes this weekend, with S.S. Lazio hosting F.C. Juventus at the Stadio Olimpico at 18:00 (GMT+1) on Saturday, November 20. This highly anticipated fixture comes after 120 matches and 367 Serie A goals in Italy’s top-flight division. Lazio’s Ciro Immobile remains at the top of Serie A’s goal-scorers list with a haul of 10, while Inter’s Nicolò Barella has the most assists, 5. Meanwhile, Napoli’s David Ospina has the highest number of clean sheets, 7. Napoli sits at the top of the Italian Serie A table, while Cagliari is left at the bottom rung of the ladder in 20th place.

Preview Lazio swept past bottom-placed Salernitana in a 3-0 win right in front of 23,000 spectators on home soil just before the international break. It was the first meeting between both sides in 22 years at the top level. Unmarked, Ciro Immobile (31') broke the deadlock a minute after the half-hour mark. Five minutes later, Pedro (36') struck for Lazio's second, before Luis Alberto (69') wrapped up the three points with a curling strike to the bottom left corner in the second half. The comfortable win – the third in five games, WLWDW – saw Lazio jump one spot higher from 6th to 5th place in the rankings, having picked up 21 points after 6W, 3D, & 3L. An impressive goal average of 2.08 goals per game leaves Lazio with 25 goals after twelve Serie A games. On Matchday 12, Lazio ranked No. 1 in top passes completed: 618, which amounts to 91% of their total against Salernitana, 13 of them being top key passes. Alongside AC Milan, Lazio completed the second-highest number of dribbles, 12, while ranking third in top attempts, 16, at the end of MD 12. Maurizio Sarri will be hoping to see similar numbers on Saturday when his side takes on Juventus. He selected the 4—3—3 formation with Immobile, Anderson, and Pedro in attack for the game against Salernitana and could appear with a similar shape on Saturday with the exception of the skipper. Immobile sustained a low-level lesion to his calf and is ruled out for this fixture against the Old Lady.

Preview Juventus picked up a narrow 1-0 victory over ten-men Fiorentina on home soil right before the break and moved one spot higher on the table, from 9th to 8th place. A last-gasp effort from Cuadrado (90'+1) in additional time saw Juve return to winning ways after three games without a victory: WDLLW. Following the win, the Old Lady has 18 points after 5W, 3D, & 4L. On Saturday, Massimiliano Allegri could line up the 4—4—2 formation against Lazio with Morata and Chiesa in attack. On availability, Federico Bernardeschi has been ruled out with a low-grade lesion of the right iliopsoas muscle and is expected to undergo further tests in 7 days. Giorgio Chiellini (Achilles' tendon) is also ruled out of this fixture, while Paulo Dybala’s availability remains in doubt due to a muscle injury.