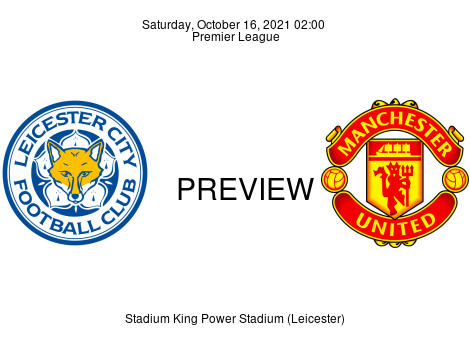 After 70 games and 184 goals, the Premier League returns with one of the most anticipated fixtures of Matchday 8, Leicester City vs. Manchester United. Mohamed Salah and Jamie Vardy sit at the zenith of the goal scorers’ list with six goals apiece while Paul Pogba has the highest number of assists (7) in the Premier League. City's goalkeeper Ederson has the highest number of clean sheets, 5, while Chelsea leads the pack at the top of the table. Norwich sits at the very bottom with only 1 point. The match between the Foxes and the Red Devils will kick off at 15:00 (GMT+1) on Saturday, October 16, at King Power Stadium. Referee Craig Pawson will be the man in the middle while Lee Betts and Dan Robathan will be assisting. Darren England will be the VAR.

Preview Leicester City have now gone four games without a win, WLLDD, after the 2-2 draw against Crystal Palace at Selhurst Park Stadium on Matchday 7. The Foxes had a two-goal lead at the break, thanks to Iheanacho (31’) and another moment of exquisite finishing from Jamie Vardy (37’). But a different Crystal Palace emerged from the tunnel to find their way back into the game. The 19-year-old second-half substitute, Michael Olise (61’) cut the Foxes’ lead down to one before Jeffrey Schlupp (72’) restored parity with a fine header. With only two points after four games, the Foxes slipped to 13th place, having picked up a total of 8 points after 2W, 2D, & 3L. Following the recent acquisition of Newcastle United, Brendan Rodgers is being tipped for the managerial job with the Magpies. However, he will be focusing on the task at hand as he looks to get back to winning ways with the Foxes on Saturday. Judging by the numbers only, the scales swing in the direction of the Red Devils. Leicester City has an average of only 1.29 goals per game, having scored only 9 goals in seven appearances, while United have an average of 2.0. The Foxes have conceded 12 goals (1.71 g.c.p.g), and have a G.D. of -3, while United have an average of 0.86 goals-conceded-per-match. On Saturday, Brendan Rodgers' 4—4—2 formation could see Vardy and Iheanacho in attack once again.

Preview Fourth-placed Manchester United are left with 14 points after the recent 1-1 draw against Everton. Ahead of Saturday’s game, United have 4W, 2D, and 1L, with the form: WWWLD. With the decision to leave Paul Pogba and Cristiano Ronaldo on the bench in the game against the Toffees coming under the microscope, Ole Gunnar Solskjær will attempt to get his selection right on Saturday. The 4—2—3—1 formation will see Ronaldo return to the starting line-up alongside Paul Pogba as Ole looks to return to winning ways. Edinson Cavani could be unavailable due to international commitments with Uruguay while Fred remains in doubt for similar reasons, albeit with Brazil. Marcus Rashford could make a cameo on Saturday after recently going under the knife for a niggling shoulder injury, while Harry Maguire remains sidelined with a calf injury. Raphael Varane is also in doubt for this fixture due to a groin injury. Victor Lindelöf could pair up with Eric Bailly at the heart of the defense on Saturday.