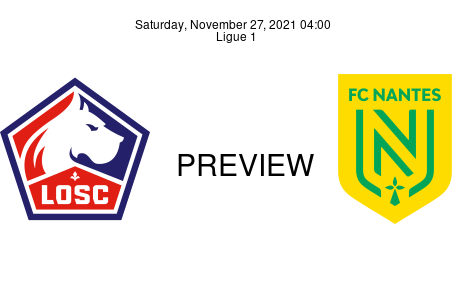 Preview Lille are back on French soil after Tuesday’s UEFA Champions League 1-0 win over RB Salzburg on UCL Matchday 5. Jonathan David (31’) continued his remarkable form for Lille, having bagged the only goal of the game to keep his side at the top of UCL Group G and within touching distance of a last-16 berth. Back on French soil, the club picked up a 2-2 draw against ten-man Monaco last Friday at the Stade Louis II. Jonathan David (5’ P. & 9’) took his tally for the club to 10 after bagging a brace against Monaco and became Ligue 1’s top scorer at the end of Matchday 14. But the numerical feat wasn’t enough for LOSC, having left the door open for Monaco’s skipper, second-half substitute, Wissam Ben Yedder (83’) to grab the equalizer. The disappointing draw leaves Lille without a win in five Ligue 1 matches: LDLDD, and in 12th place, having picked up 17 points after 4W, 5D, & 5L. On the numbers, Lille has a goal ratio of 1.29 g.p.g. this season, with 18 goals in 14 Ligue 1 games. The club has also conceded 21 goals and has a G.D. of -3. An average of 1.5 goals conceded per game. Burak Yilmaz returned to the starting line-up for the game against RB Salzburg after starting from the bench in Lille’s game against Monaco on Matchday 14. The Turkey international is expected to keep his place in Jocelyn Gourvennec’s famous 4—4—2 formation alongside the €35M-rated Canadian-American, Jonathan David on Saturday.

Preview The Yellow House saw their walls crumble as they fell to a 3-1 defeat at the hands of ten-man PSG on Matchday 14, with 48,000 spectators present in the stadium. Kolo Muani's 76th-minute strike served as a consolation after an effort from Mbappe (2'), an own goal by Dennis Appiah (82' O.G.), and a maiden Ligue 1 goal from Lionel Messi (87') condemned Nantes to their second defeat in five games: DWLDL. Nantes dropped one spot lower from 10th to 11th place on the Ligue 1 table, having picked up 18 points from 5W, 3D, & 6L. The club has conceded as many goals as they have scored, 19, and it leaves Nantes with a G.D. of 0. - While having both performance metrics, average goals conceded and average goals scored, measured at 1.36 goals per 90. La Maison Jaune could line up with the 4—2—3—1 formation against Lille, having Kalifa Coulibaly in attack once more. Antoine Kombouaré could be without the Nigerian, Moses Simon (muscle injury) and also Roli Pereira De Sa (collar bone injury) on Saturday.