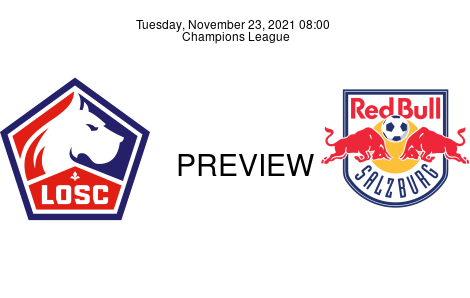 The UEFA Champions League Group G fixture, Lille OSC vs. FC Red Bull Salzburg, kicks off at 21:00 (GMT+1) on Tuesday, November 23 at the Stade Pierre-Mauroy. Referee Anthony Taylor (ENG) will be working alongside the assistant referees, Gary Beswick (ENG) and Adam Nunn (ENG), while the fourth official, Darren England (ENG), will be in communication from the sidelines. Chris Kavanagh (ENG) will be the VAR.

Preview Lille returns to UEFA Champions League action following the 2-2 draw against AS Monaco in France over the weekend. Despite having the numerical advantage, Lille failed to break down 10-men Monaco, leaving the second-half substitute Wissam Ben Yedder (83’) with the equalizer after a brace from Jonathan David (5’ P. & 9’). Back on European soil, LOSC picked up their first victory on UCL Matchday 4, following the 2-1 win over Sevilla at the Ramón Sánchez Pizjuán, to remain in contention for a place in the last-16. Lille are in 2nd place in Group G, tied on points (5 each) with 3rd-placed Wolfsburg, while trailing by two points to 1st-placed Salzburg. Lille have 1W, 2D, & 1L after four UCL fixtures. The French outfit has only one victory in five games across all competitions: DLWDD, and remains without a win in five on the domestic front, LDLDD. On Tuesday, Jocelyn Gourvennec could line up the conventional 4—4—2 formation once again. Burak Yilmaz surprisingly made an extra-time cameo for the game against Monaco but is expected back in the starting lineup on Tuesday alongside Jonathan David, who has 1 goal in this competition and 10 in Ligue 1. Benjamin André and Ikoné are suspended, while the trio consisting of Bamba, Burak Yılmaz, and Xeka will miss the next match if booked. Meanwhile, Renato Sanches is ruled out for a few weeks following a muscle injury.

Preview RB Salzburg picked up a goalless draw on the home front against FC Flyeralarm Admira in the Austrian Bundesliga on Saturday. Despite a 2-1 defeat to Wolfsburg on UCL MD4, Salzburg is at the top of the table with 7 points and aims to defeat LOSC in a bid to secure a place in the last-16 with one game to spare. With a first-place finish a near possibility, the Austrian outfit will be counting on a number of favorable outcomes in the remaining round of fixtures. Salzburg is unbeaten in five games on the domestic front: DWDWD. However, the Austrians have one defeat in five games across all competitions: WDLWD and 2W, 1D, & 1L, after four UCL matches. On Tuesday, Matthias Jaissle could do with the 4—3—1—2 formation once again, with Karim Adeyemi playing alongside Okafor in attack. If booked, Camara misses the next match.