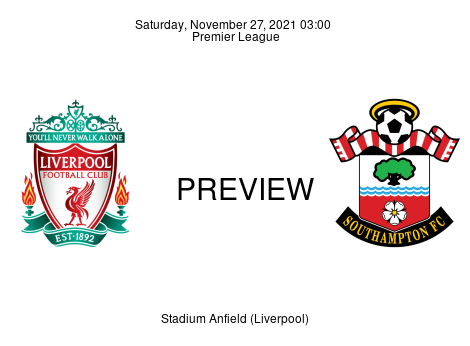 The Reds take on the Saints in another highly anticipated Premier League fixture on Matchday 13. Mohamed Salah caught up with Paul Pogba at the top of the assist charts and now has seven, along with the Frenchman. However, the Egyptian enjoys the spotlight alone as the Premier League’s top scorer with a haul of 11. Chelsea’s Edouard Mendy and City’s Ederson have the highest number of clean sheets in the Premier League with 7 each. Meanwhile, the Blues lead the pack at the top, ahead of their closest rivals, Manchester City, by 3 points, while new moneybags, Newcastle United, dropped to the bottom of the league table after a 3-3 draw against the Bees on Matchday 12. EPL Matchday 13 presents itself after 120 games and 338 goals. Liverpool vs. Southampton kicks off at 16:00 (GMT+1) on Saturday, November 27, at Anfield.

Preview Liverpool is back in for more Premier League action after defeating FC Porto 2-0 in a dead rubber Group B fixture on UEFA Champions League Matchday 5. Liverpool were on the back foot in the opening minutes but gradually grew into the game. Later, Mane thought he had the Reds in the lead but saw his would-be opener chalked off after a VAR review. Minutes after the break, an inch-perfect strike by Thiago Alcântara (52’), complemented by several well-computed parabolic equations, rattled the back of the net for the legitimate opener. Moments later, the red-hot-form Mohamed Salah (70’) struck for Liverpool’s second. Whoever sees Thiago in training knows he has the technique to do it. Klopp said of the midfielder's 52nd-minute opener. It was good timing, a great goal, he added. Back on Premier League soil, Liverpool made light work of an Arsenal side backed by a 10-game unbeaten run. A feisty encounter played out between both managers on the sidelines around the half-hour mark, with the stalemate intact, before Liverpool drew their inspiration from the ugly incident and crushed Arsenal 4-0. As expected, the three amigos, Mane (39'), Jota (52'), and Salah (73'), all hit the back of the net, before Minamino (77') rubbed salt on the injury with the fourth at Anfield. The impressive victory over Arsenal saw Liverpool jump one spot ahead, from 4th to 3rd place, having returned to winning ways: WWDLW. The Reds have 25 points after 7W, 4D, & 1L. A win for Klopp could see Liverpool take another step ahead if second-placed Manchester City, who have a tricky fixture against West Ham, fail to win. The famous 4—3—3 formation will be seen again with several key players back in the starting line-up having been rested for the game against FC Porto.

Preview Southampton picked up a 2-1 defeat to Norwich City last Saturday at Carrow Road, but held on to 13th place on the Premier League table while having 14 points after 3W, 5D, & 4L. The club has a form that reads: WDWWL ahead of this fixture against Liverpool, and Ralph Hasenhüttl will be looking to avoid back-to-back defeats. The conventional 4—4—2 with Che Adams and Adam Armstrong in attack is expected once again.