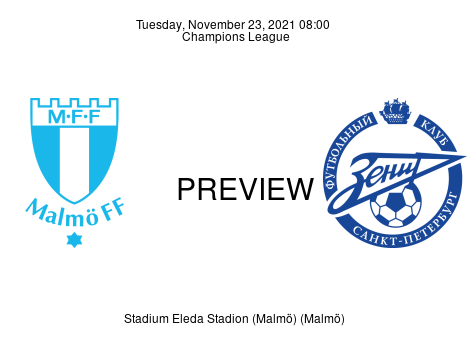 Malmö meets F.C. Zenit St. Petersburg once again following their 4-0 defeat to the Russian side on UCL Matchday 2. Scheduled for 21:00 (GMT+1) on UEFA Champions League Matchday 5, Tuesday, November 23, at the Eleda Stadion, referee Andris Treimanis (LVA) will be in charge alongside the assistant referees, Haralds Gudermanis (LVA) and Aleksejs Spasjoņņikovs (LVA). Meanwhile, João Pinheiro (POR) will be carefully hidden away in the VAR room.

Preview Bottom-placed Malmö sank deeper into the quicksand after a 1-0 defeat to Chelsea on UCL MD4. The result leaves the Swedish side in a precarious situation and in dire need of a win for a third-place finish to keep playing European football this season, albeit under the banner of the Europa League. The home side had held on to the stalemate against Chelsea until the second-half when Hudson-Odoi's remarkable assist, in the shape of a curling pass across the face of goal, found Ziyech (56’). The narrow loss leaves Malmö with no points after four consecutive defeats: 0W, 0D, & 4L. The results remain in stark contrast when placed side-by-side with their domestic run on the home front, in Allsvenska. Malmö is in first place in the league and remains unbeaten in five games: DWWWD. Having only one defeat in five across all competitions (WWLWD), Jon Dahl Tomasson could be lining up another 4—2—3—1 formation with Colak leading the attack. If booked, Franz Brorsson and Nielsen will miss the next match. Ola Toivonen and Jonas Knudson are out of the squad and the season due to knee injuries, while Anders Christiansen’s availability remains in doubt.

Preview Zenit is also faced with a similarly precarious situation, although they remain in contention for a top-two finish. The club sits in 3rd place with 3 points following the 4-2 defeat to Juventus on UCL MD4. Having 1W, 0D, & 3L, after four UCL games, FC Zenit must defeat Malmö and count on a Chelsea defeat at home to Juventus to remain in contention for the round of 16. Sergey Semak's side have only one defeat in five games across all competitions: WWLDW. Over the weekend, the Russian side defeated ten-men FK Nizhny Novgorod, 5-1, in the domestic league where they sit in first place. After bagging a hattrick over the weekend against Novgorod, Artem Dzyuba (34’, 45’+1 & 59’) is poised to lead the attack in a formation fashioned with three at the back while playing ahead of a duo in the 3—4—2—1 design. Meanwhile, Sardar Azmoun is expected to come off the bench. Zenit could be without Claudinho (illness), Stanislav Kritsyuk (leg injury), and Daler Kuzyaev (knock).