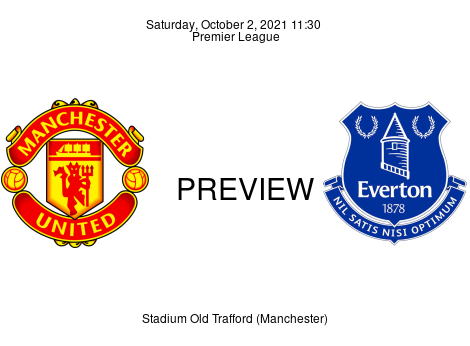 The English Premier League fixture, Manchester United F.C. vs. Everton F.C. kicks off at 12:30 (GMT+1) on Matchday 7, Saturday, October 2 at Old Trafford. Referee Michael Oliver will be in charge while the assistants, Stuart Burt and Simon Bennett, will provide help. Stuart Attwell will be in the VAR room.

Preview The Red Devils will return to Premier League action after Wednesday's 2-1 win over Villarreal in the UEFA Champions League. Both sides appeared to have settled for a point, but a last-gasp effort from Cristiano Ronaldo (90+5') eventually separated the teams. Last weekend, United's title campaign suffered a huge blow with the 1-0 defeat to Aston Villa at the Theatre of Dreams. A single goal from Kortney Hause (88') saw United pick up their first defeat of the season: DWWWL. The result also saw the Red Devils drop to 4th place, while left with 13 points after 4W, 1D, & 1L. The Red Devils have an impressive average of 2.17 goals per game with 13 goals in six Premier League games. Conceding only 5 goals, an average of 0.83 goals conceded-per-game, United has a G.D. of +8. Ole Gunnar Solskjaer will aim for three points, knowing United has a fantastic record against the Toffees. - Having faced defeat only once in their last 10 encounters against Everton. The 4—2—3—1 formation with Ronaldo at the top of the formation is expected on Saturday. Should the Portuguese ace who came to United's rescue against Villarreal play, then it would be his 200th Premier League appearance in the red colors of the Devils. - The 24th different Manchester United player to reach this statistical milestone. Ronaldo has 87 goals for United in English top-flight football, and he will be on the hunt for the 88th. Marcus Rashford is ruled out alongside Amad Diallo.

Preview Everton defeated Norwich City, 2-0, on home soil last weekend, thanks to goals from Andros Townsend (29' P.) and Abdoulaye Doucoure (77'). Rafael Benítez's side are 5th on the Premier League table, having picked up 13 points from 4W, 1D, & 1L. With three victories in five games: DWWLW, Benitez is unsure whether his team can replicate their fine form against the Red Devils, citing their history. Close on the average goals to United, with 2 goals scored per game, Everton falls short on the average conceded, having 1.17 goals-conceded-per-match. With Rafael Benítez in focus, the 61-year-old has lost more than 75% of his last nine Premier League away matches against the Red Devils. - Seven of them, while winning the other two (2W, 0D, & 7L). Rafael Benítez would likely go with the 4—2—3—1 formation with Salomón Rondón in attack due to the unavailability of Cenk Tosun and Dominic Calvert-Lewin.