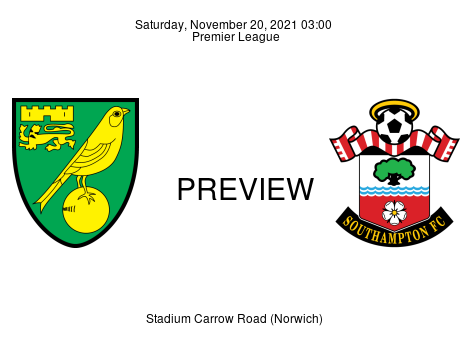 The Premier League fixture, Norwich City vs. Southampton FC, kicks off at 16:00 (GMT+1) on Saturday, November 20, at Carrow Road. Referee Martin Atkinson will have the assistants, Dan Cook and Richard West, by his side for this game, while the fourth official, John Brooks, will be on the sidelines. Lee Mason will make himself useful in the VAR room.

Preview Akin to Steven Gerrard and Eddie Howe, Dean Smith will be making his coaching debut with his new club. Without skipping a beat, the 50-year-old returns to the coaching seat one Matchday after he was fired at Aston Villa following five consecutive defeats. He will be the first manager to face an opponent in consecutive Premier League fixtures in the same season but with two different clubs. He replaces Daniel Farke, who was sacked hours after the Canaries picked up their first victory of the season in the 2-1 win over Brentford. My job is to keep us in the league and that’s firmly what I believe we can do, Smith retorted during a recent interview after his appointment. We've got 27 games left in the Premier League, so there's a lot of points to play for and we're just on the back of a win. Yes, it's been difficult in the Premier League so far, he added. Mine and Craig [Shakespeare's] job, along with the rest of the staff and Stuart [Webber], is to keep us in the league this season, Smith included. On Saturday, he will dive right into the deep end as he looks to steer Norwich away from the turbulent end of the Premier League table. With five points out of a possible fifteen in the last five games, DDLLW, the Canaries remain rooted in 20th place after 1W, 2D, & 8L. Smith will look to put out the lights from what appears to be a candle burning at both ends. Norwich are unable to create in the final third and have a goal ratio of 0.45 g.s.p.g. this season while conceding an average of 2.36 goals per 90. The familiar 4—2—3—1 formation seen on Matchday 11 could remain in place with Pukki in attack for this game against the Saints.

Preview Following the narrow 1-0 win over Villa, Southampton jumped one step higher, from 14th to 13th place on the Premier League table. The Saints have 14 points from 3W, 5D, & 3L and return with back-to-back victories: LWDWW, ahead of this fixture against Norwich. Southampton are looking to secure three league wins in a row for the first time since November 2020. Ralph Hasenhüttl’s side could line up with the 4—4—2 formation against Norwich, leaving Che Adams and Adam Armstrong in attack. Jamie Ward-Prowse's availability is shrouded in doubt due to illness, while Valentino Livramento may also fail to make an appearance on Saturday, along with Nathan Redmond (coronavirus).