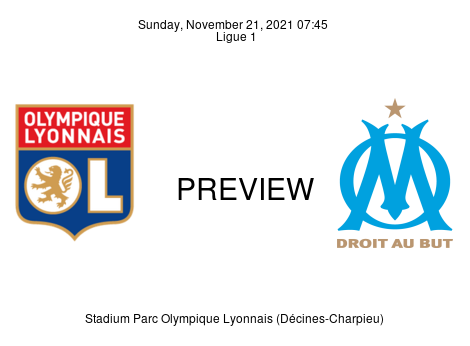 Choc des Olympiques, Olympique Lyonnais vs. Olympique de Marseille kicks off at 20:45 (GMT+1) on Sunday, November 21, at the Groupama Stadium. Bernard Lacombe (12 goals) remains the top scorer of this iconic fixture whose first edition was held on the 23rd of September 1945.

Preview Lyon suffered a 4-1 defeat at the hands of Rennes in their last game, right before the international break at Roazhon Park, with 28,222 spectators present in the stands. At the death, Lucas Paqueta (90'+3 P.) bagged the consolation goal for Lyon, after goals from Laborde (45') and Traore (50') had put Lyon in the lead inside an hour. - Well before a brace from Truffert (76' & 83') put the game beyond reach. The humiliating defeat leaves Lyon with the Ligue 1 form: DWLWL. However, the club held on to 7th place, despite failing to pick up a point. Lyon have accrued 19 points from 5W, 4D, & 4L, and Peter Bosz will be on the hunt for three more points to see his side return to winning ways on Sunday. Focusing on the numbers, Lyon has a goal ratio of 1.62 g.p.g. this season, having scored 21 goals in 13 Ligue 1 games. They have also conceded as many goals, 21 goals, and have a G.D. of 0. For this game against Marseille, Bosz could do with the 4—3—3 formation, having Lucas Paqueta in center-forward position once again. Tino Kadewere is suspended for this game, while Moussa Dembele (calf injury) and Léo Dubois (hamstring) are both ruled out. Lenny Pintor and Jeff Reine-Adelaide are expected back at the end of the month, having both suffered ACL injuries.

Preview Marseille picked up a goalless draw against ten-men FC Metz at the Stade Vélodrome but retained their spot in 4th place at the end of Matchday 13. An additional point left Les Olympiens with a total of 23 points after 6W, 5D, & 2L, and saw them remain unbeaten in five league games: WDDWD, ahead of this fixture against Lyon. The club has 20 goals after 13 Ligue 1 games, a goal ratio of 1.54 goals per game. Furthermore, Marseille have conceded 12 goals so far this season and have a G.D. of +8. An average of 0.92 goals per match. For the game against Metz, Jorge Sampaoli utilized the 4—4—1—1 formation and could be sticking to the same shape for this game against archrivals Lyon. Leonardo Balerdi is suspended, while Cengiz Ünder (lumbago) is expected back at the end of the month.