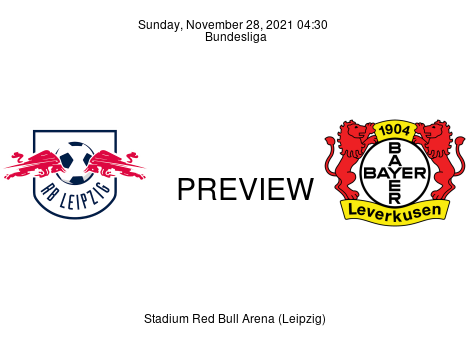 Preview The Red Bulls return from their European commitments having thrashed Club Brugge, 5-0, on Wednesday, UEFA Champions League Matchday 5. We're absolutely delighted with the win, assistant coach Achim Beierlorzer said right after the game. Beierlorzer was left in charge after Jesse Marsch came up with a positive coronavirus test. The mentality the lads went about the game with was fantastic, the 54-year-old added. Back on the home front, Leipzig picked up a 2-0 defeat to Hoffenheim on Bundesliga Matchday 12 at the PreZero Arena with 13,000 spectators in attendance. On the back foot for the entire length of the game, Leipzig were completely switched off, leaving Hoffenheim calling, time and time again, in a wave of blue attacks. Having no shots on target at the other end, Leipzig’s Péter Gulácsi remained the busier goalkeeper of the two. Goals from Samassekou (12') and Dabbur (68') put Hoffenheim in the lead, but the home side were back for more, only to be denied by the woodwork, twice, in one moment. The defeat was Leipzig’s first in five Bundesliga games, DWDWL, and it saw the club drop two spots from 5th to 7th place, having failed to pick up a point. The Red Bulls have 18 points after 5W, 3D, & 4L. Achim Beierlorzer is expected to take charge of Sunday’s game against Leverkusen, with a fully vaccinated Marsch expected in quarantine. A 3—4—2—1 formation with Andre Silva in attack may be seen. Halstenberg (ankle), Olmo (hamstring), and Yussuf Poulsen (calf) are all ruled out, alongside Saracchi (knee). Péter Gulácsi (COVID-19) has not been included in the squad.

Preview Leverkusen picked up a 3-2 win over Celtic on Thursday in the UEFA Europa League. Back on the home front, Bayer Leverkusen picked up a 1-0 win over VfL Bochum on Matchday 12, thanks to a single goal by Amine Adli (3'). It was the first Bundesliga win for Leverkusen in five games: LDLDW. The victory saw Leverkusen jump two spots from 6th to 4th place on the Bundesliga table, having picked up 21 points from 6W, 3D, & 3L. Gerardo Seoane aims for a win to see his side maintain a grip on a top-four spot. Die Werkself could line up with the 4—2—3—1 formation, leaving Patrik Schick with the goal-scoring responsibilities while playing ahead of an attacking trio. On availability, Bakker (ankle), Baumgartlinger (knee), and Fosu-Mensah (knee) are all ruled out of this Sunday’s fixture against Leipzig.