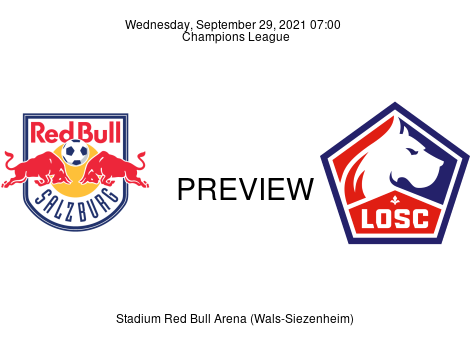 Preview Having bagged a 1-1 draw against Sevilla on Matchday 1, Red Bull Salzburg will be in the run for three points when they welcome Lille OSC to the Red Bull Arena this Wednesday. Over the weekend, the Austrian Bundesliga side picked up a 2-0 win over Wolfsberg in the domestic league. Salzburg enjoys domestic dominance in the league, sitting at the top of the table with five consecutive victories: WWWWW. Following two draws in Group G on UEFA Champions League Matchday 1, all teams have equal points. Manager Matthias Jaissle will be in the hunt for his first win in his first UCL season with the club. In the recent past, Salzburg has only lost one of their last five games against French teams: 3W, 1D, & 1L. Jaissle is expected to line up a 4—3—1—2 formation with Karim Adeyemi playing alongside Okafor in attack. Adeyemi remains the club's top-scorer in the domestic league with 7 goals in 9 appearances for the club while having a 34% contribution to the haul of goals. Junuzović (heel), Piątkowski (ankle), and Solet (knee) are all ruled out of this fixture, while Wöber remains sidelined with a thigh injury. RB Salzburg will host Wolfsburg at the Red Bull Arena in Salzburg on UEFA Champions League Matchday 3, Oct. 20.

Preview Lille OSC returns to UEFA Champions League action following the goalless draw against German Bundesliga side, Wolfsburg, on UEFA Champions League Matchday 1. Over the weekend, LOSC picked up a 2-1 victory over Strasbourg in the French Ligue 1. Unlike Red Bull Salzburg, Lille are struggling on the home front, remaining in 9th position on the domestic table despite three victories in five games: WLLWW. On Tuesday, Jocelyn Gourvennec could line up the conventional 4—4—2 formation with Burak Yilmaz and Jonathan David leading the attack. - In an attempt to get Lille’s UEFA Champions League campaign on the path to advance into the knock out stage. On availability, Bamba (thigh) and Renato Sanches (knee) are ruled out, while Léo Jardim (ribs) remains sidelined. This is the first meeting between both sides and LOSC's first game against an Austrian outfit. Looking ahead, LOSC will welcome Sevilla to the Stade Pierre-Mauroy on Matchday 3, Oct. 20.