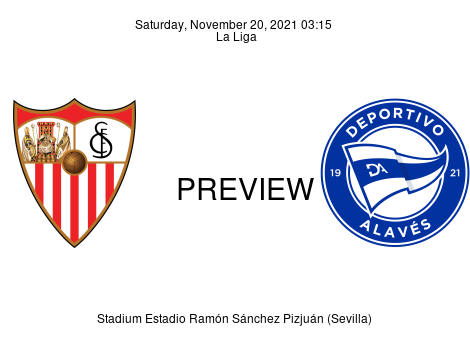 The LaLiga Santander fixture, Sevilla F.C. vs. Deportivo Alaves kicks off at 16:15 (GMT+1) on Saturday, November 20, at the Estadio Ramón Sánchez Pizjuán.

Preview Sevilla picked up a 2-0 win over Real Betis at the Estadio Benito Villamarín on Sunday, November 7. A goal from Marcos Acuna (55'), coupled with an own goal from Hector Bellerin (81' O.G.) was enough to determine the outcome of the game. The victory left Sevilla unbeaten in five LaLiga matches: WWDWW, and in third place, having picked up 27 points after 8W, 3D, & 1L, while having a game in hand. The club has equal points with Madrid and trails first-placed Real Sociedad by only a point. Julen Lopetegui will fancy a win over Alaves, knowing his side has the numbers to pick up three points. Sevilla has a goal ratio of 1.75 g.p.g. this season, having scored 21 goals in twelve La Liga games. The club has a goal difference of +14 thanks to a disciplined backline that has conceded only 7 goals. An average of 0.58 goals conceded per 90. A 4—3—3 formation with Rafa Mir at the center of the attacking trio is expected from Julen Lopetegui against Alaves on Saturday. Along with Erik Lamela, Rafa Mir has the highest number of goals for the club this season, 4, - which is a 22% goal participation for Sevilla in LaLiga. Looking ahead, Sevilla takes on Wolfsburg on Tuesday, November 23, UEFA Champions League Matchday 5.

Preview Deportivo Alavés picked up a 2-1 win over Levante just before the World Cup qualifying round of fixtures on Saturday, November 6, at the Mendizorrotza. A brace from Joselu (77' P. & 90'+1) was enough to settle the duel of ninety minutes, which had seen Jorge de Frutos (13') put Levante ahead inside the opening fifteen minutes. The victory helped Alaves move four spots higher, from 18th to 14th place on the La Liga table, having picked up 13 points from 4W, 1D, & 7L. The club has a form that reads: LWWDW ahead of this fixture against Sevilla, and another spirited performance could see Alaves leave Estadio Ramón Sánchez Pizjuán with at least a point. Alaves has 8 goals after 12 La Liga games and a goal ratio of 0.67 goals scored per every 90. In addition, the Babazorros have conceded 15 goals (an average of 1.25 goals per match) so far this season and have a G.D. of -7. Manager Javier Calleja could appear along with the Babazorros adopting a 4—3—3 formation against Sevilla, with Joselu at the heart of the attack.