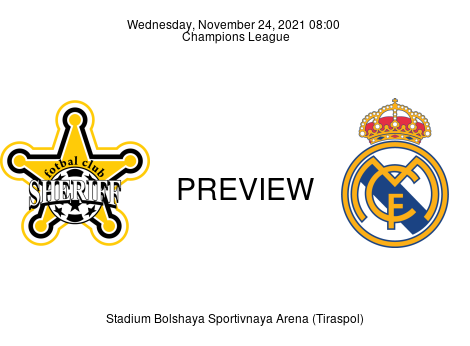 The UEFA Champions League Group D fixture, Sheriff Tiraspol vs. Real Madrid CF, kicks off at 21:00 (GMT+1) on Wednesday, November 24, at the Bolshaya Sportivnaya Arena. Referee Szymon Marciniak (POL) will be in charge for the length of the ninety minutes while Tomasz Kwiatkowski (POL) will be the VAR.

Preview After a remarkable start to cement their historical entry into the circle of champions, Sheriff Tiraspol's European campaign has since stalled. The Moldovan side returns with back-to-back defeats on European soil after four UCL games: WWLL, following a 3-1 loss to Inter Milan on UCL MD4. Sheriff sits in 3rd place in Group D with 6 points and remain in contention for a top-two finish, as they trail second-place Inter Milan by a point after 2W, 0D, & 2L. Having one defeat in five games across all competitions: WWLWW, Yuriy Vernydub's side aims for another victory to get their maiden UEFA Champions League season back on track. Vernydub, 55, could line up the 4—2—3—1 formation, which could see Frank Castañeda at the top of the shape for this game against Madrid. Addo and Dulanto will miss the next game if they pick up a booking on Wednesday.

Preview Real Madrid returns to UEFA Champions League action after Sunday’s 4-1 win over ten-man Granada in the Spanish La Liga. On UCL Matchday 4, Real Madrid picked up a 2-1 win over Shakhtar Donetsk to cement their position at the top of the table, two points ahead of second-placed Inter Milan. The Spanish side has 9 points after 3W, 0D & 1L after four UCL games. The Madrid-based club visits Moldova for the first time for this reverse fixture, having been beaten in Spain, 2-1, by the UEFA Champions League debutants. Real Madrid will advance to the round of 16 if they win this game, and they will be assured of first place if Inter fails to defeat Shakhtar at home in another Group D Matchday 5 match. Los Blancos remains unbeaten in five games across all competitions, DWWWW, and on Wednesday, Carlo Ancelotti will try to extend the white patch of impressive results when his side faces Sheriff Tiraspol for the second time in the group stage. Ancelotti’s probable 4—3—3 formation could see Benzema in the middle, Vinicius Jr. on the left, and Lucas Vázquez on the right in attack. Eden Hazard failed to feature in Madrid’s win at the weekend due to gastroenteritis. Federico Valverde and Gareth Bale are ruled out, along with Daniel Ceballos. If booked, Casemiro will miss the next match.