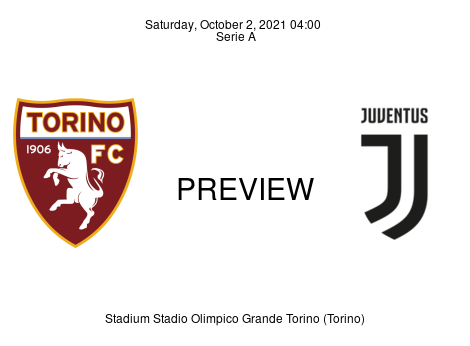 The Derby della Mole ushers in another round of Serie A action over the weekend and ahead of the international break. A quick look at the headliners leaves us with Lazio's Ciro Immobile at the top of the goal scorer's chart with a haul of six, while Inter's Nicolò Barella tops the assists list with five. Milan's Mike Maignan and Napoli's David Ospina share the spot clean sheets with 3 apiece, while Napoli sits at the top of the table and the newcomers, Salernitana, remain at the bottom end. The oldest derby of Italian football returns in its 246th edition across all categories, with Torino hosting Juventus at the Olimpico di Torino this Saturday, Oct. 2nd, at 17:00 (GMT+1).

Preview Ten-men Torino picked up a 1-1 draw in a terrific game, one filled with several clear-cut chances against Venezia on Matchday 6 at the Pier Luigi Penzo Stadium. Torino's Josip Brekalo (56') put the visitors ahead eleven minutes after the restart and well before his teammate, Koffi Djidji (R. 76') was shown the marching orders after a second yellow. Djidji had brought down a goal-bound David Okereke in the box. Mattia Aramu (78') converted the following penalty to deny Torino the win. Following back-to-back draws, LWWDD, Torino remains in 9th place, having picked up 8 points after 2W, 2D, & 2L. A brief look at the numbers leaves us with the average: 1.5 goals per game, and a total of 9 goals while conceding six times (1 g.c.p.g.).  A draw would be on Ivan Juric's mind this Saturday. His 3—4—2—1 formation could see Antonio Sanabria, who got the start in attack against Venezia, forced back to the bench by the skipper, Andrea Belotti. This would be the first episode of their rivalry while having equal points since 2015. Ivan Juric will be without Marko Pjaca and Simone Edera for this game.

Preview Juventus return to Serie A commitments after Wednesday’s 1-0 UCL win over the UEFA Champions League title winners, Chelsea. Federico Chiesa (46’) scored the game’s only goal right after the restart. Last weekend, Juventus picked up a hard-fought 3-2 victory over La Samp on home soil. It was a costly defeat which saw Juventus lose both Paulo Dybala and Alvaro Morata to thigh injuries, which resulted in their absence in the 1-0 win over Chelsea on Wednesday. After medical examinations at J. Medical, both players will remain sidelined for several weeks. Juve is in 10th place with 8 points from 2W, 2D, & 2L and has the domestic form: LLDWW. The club has 10 goals after six appearances, which leaves the Old Lady with an average of 1.67 goals scored per game. I Bianconeri have conceded 10 goals so far, an average of 1.67 goals-per-match. Massimiliano Allegri’s 4—4—2 formation will see Federico Chiesa and Bernardeschi at the top of the shape. Kaio Jorge remains in doubt for this fixture. The Old Lady has kept a clean sheet in 62% of all her Serie A away encounters against Torino and has also scored in each.