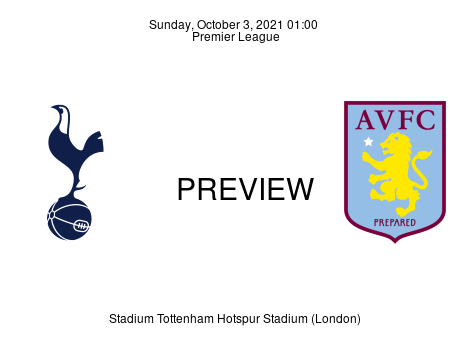 The English Premier League fixture, Tottenham Hotspur vs. Aston Villa, kicks off at 14:00 (GMT+1) on Sunday, October 3 at the Tottenham Hotspur Stadium. Referee Chris Kavanagh will have Dan Cook and Dan Robathan helping out, while Michael Oliver will be the VAR.

Preview Last weekend, Tottenham picked up another embarrassing defeat, this time around in the North-London Derby against arch-rivals Arsenal. Goals from Emile Smith Rowe (12'), Aubameyang (27') and Bukayo Saka (34') in the first half decided the outcome of the game, leaving Son (79') with the consolation goal for Spurs. With three consecutive defeats, WWLLL, Spurs remains in 11th place, having picked up 9 points after 3W, 0D, & 3L. A closer look at the numbers reveals that Spurs have an average of 0.67 goals per game, having scored only 4 goals in six Premier League games. Unimpressive numbers, poor in comparison to last season’s figures. Loose at the back, Spurs have conceded 9 goals (1.5 g.c.p.g), and are left with a negative goal difference of -5. Following Thursday’s 5-1 win over NS Mura in the first edition of the UEFA Europa Conference League, Nuno Espírito Santo aims to follow up with a victory this weekend. He could adopt the 4—3—3 formation with Lucas Moura, Harry Kane, and Son once again in attack. Son is Spurs’ top scorer with three goals and has been involved in ten goals in his last 11 Premier League appearances at the Tottenham Hotspur Stadium (6G, 4A). The South Korean will aim to extend his tally on Sunday when Spurs meet Villa. For Spurs, Steven Bergwijn is ruled out of this fixture.

Preview Meanwhile, the Lions took the honour of handing Manchester United their first defeat of the season in Saturday’s 1-0 win at the Theatre of Dreams. Aston Villa had failed to convert a clear-cut chance in the first half, before a mazy run from Ollie Watkins ended with a save from David de Gea in the second. But a remarkable header from Villa’s Kortney Hause (88’) following a set piece separated both sides at full-time. The victory keeps Aston Villa in 8th place on the Premier League table, having picked up 10 points from 3W, 1D, & 2L. Having back-to-back victories: WDLWW, Villa enters into this contest with a haul of 9 goals after six Premier League games. An average of 1.5 goals scored per game. The Claret & Blue Army have conceded 7 goals (1.17 g.c.p.g) so far and are left with a G.D. of +2. Dean Smith’s probable 3—5—2 formation could see Watkins and Ings fostering their attacking partnership once again. Villa are looking to pick up consecutive Premier League victories over Spurs for the first time since September 2008. On availability, Trezeguet remains doubtful for this fixture.