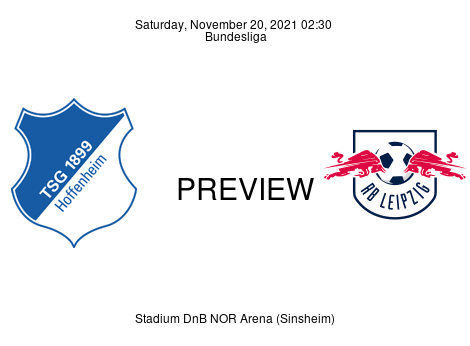 Preview Hoffenheim picked up a 2-0 defeat to VfL Bochum before the international break on Matchday 11. Goals from Bochum’s Soma Novothny (66') and Milos Pantovic (90'+7) at the Vonovia Ruhrstadion saw Hoffenheim crumble to their third defeat in five Bundesliga games: LWLWL. The defeat saw the club drop one spot from 9th to 10th place on the table, while being left with 14 points after 4W, 2D, & 5L. Mid-table with an average goal ratio of 1.73 gpg, Sebastian Hoeneß’s side could do with a win. However, picking up a victory against Leipzig would be a tall order considering the opposition has not lost in five games. In total, Hoffenheim have hit the back of the net 19 times this season after eleven Bundesliga games. With narrow margins at the back, the club has conceded an average of 1.55 goals per 90 minutes, leaving Hoffenheim with a total of 17 goals conceded and a G.D. of +2. Three at the back, fashioned into the 3—4—1—2 formation, is expected against the Red Bulls with Bebou and Kramaric in attack. A look at the injury list leaves Bicakcic (knee), John (shoulder), and Kaderabek (ankle) out of this fixture, alongside Robert Skov (thigh). Hübner is struggling with match fitness, while Geiger remains doubtful with a foot injury.

Preview Die Roten Bullen picked up a hard-fought 2-1 win over Borussia Dortmund on Matchday 11. October Player of the Month nominee, Christopher Nkunku (29'), latched on to a through pass from Josko Gvardiol, before rounding the Dortmund goalkeeper, Kobel, for the Leipzig lead. Minutes after the break, Marco Reus (52') restored parity after getting on the end of Thomas Meunier’s defense-splitting pass. At 1-1, with all to play for, Christopher Nkunku executed a Marseille turn right inside the box, to the awe of four yellow shirts who watched in disbelief, before crashing his shot against the woodwork. A moment later, the 24-year-old picked out Yussuf Poulsen (68') with a deft assist across the face of goal to leave Leipzig unbeaten in five Bundesliga games: WDWDW. The impressive victory saw the Red Bulls charge from 8th to 5th place on the Bundesliga table, having picked up 18 points from 5W, 3D, & 3L. Jesse Marsch would be counting on the individual brilliance of MD 11's Man of the Matchday, Christopher Nkunku once again. Christo's outstanding right now, said Marsch ahead of Saturday’s game. The Frenchman is expected to lead the attack in Marsch's 3—4—2—1 formation against Hoffenheim. On availability, Szoboszlai (thigh) remains in doubt for this fixture alongside, Henrichs (back).