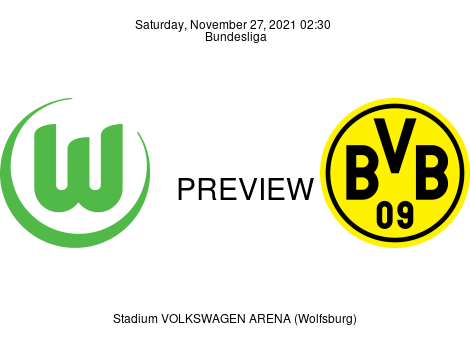 The Wolves are back for Bundesliga action as they take on Borussia Dortmund in another highly anticipated fixture slated for kick-off at 15:30 (GMT+1) on Saturday, November 27, at the Volkswagen Arena.

Preview Wolfsburg were defeated 2-0 by Sevilla at the Ramón Sánchez Pizjuán in the star-studded arena of champions on UEFA Champions League Matchday 5. With only one shot on target, goals from Joan Jordán (12’) and Rafa Mir (90’+7) left Wolfsburg at the bottom of UCL Group G with qualification for the round of 16 hanging in the balance. We have to be honest and admit that it wasn't good enough, a disappointed Kohfeldt said right after the game in an interview with Amazon Prime. Back on German soil, Wolfsburg salvaged a point after a hard-fought 2-2 draw against Arminia Bielefeld on the road last Saturday with 20,000 spectators present at the Bielefelder Alm. Masked man Patrick Wimmer cut through a forest of green-shirts before picking out Masaya Okugawa (11') with a deft lob for a Bielefeld lead. Minutes into the second half, Fabian Klos (54’ P.) doubled the lead from 12 yards. But Wolfsburg would strike back through Wout Weghorst (62') to cut the deficit down to one. A minute later, red-hot-form and new German international, Lukas Nmecha (63') completed Wolfsburg’s comeback, having found the leveler. The draw was the first in five games: LLWWD, and it moved Wolfsburg two spots lower, from 4th to 6th place on the table, while having 20 points after 6W, 2D, & 4L. Florian Kohfeldt’s 3—4—2—1 formation could see Weghorst in attack once again, playing ahead of the duo consisting of Lukas Nmecha and Yannick Gerhardt.

Preview Ten-man Dortmund picked up a 3-1 defeat to Sporting CP, earlier in the week, on UCL Matchday 5. Back on the home front, the Black & Yellows picked up a 2-1 win over VfB Stuttgart on Matchday 12 at Signal Iduna Park, thanks to goals from Donyell Malen (56') and Marco Reus (85'). The victory saw BVB set a new club record by making it seven home Bundesliga wins from seven games this season. The win also saw Dortmund cut the deficit on the table down to one, with league leaders, Bayern Munich, having lost to Augsburg, 2-1, earlier on Friday. In second place with 27 points from 9W, 0D, & 3L, the Black and Yellows have the form: WWWLW. Marco Rose aims for back-to-back victories on Saturday despite being equipped with a side riddled with injuries. Rose could appear along with Die Schwarzgelben adopting a 4—2—3—1 formation with Malen leading the attack. Haaland (hip) remains sidelined until mid-December, while Morey (knee) and Reyna (thigh) are also ruled out. Schmelzer (knee) is back in training but Marius Wolf remains sidelined with a thigh injury. Hazard has been left out of the squad, while Moukoko (eye) remains doubtful.