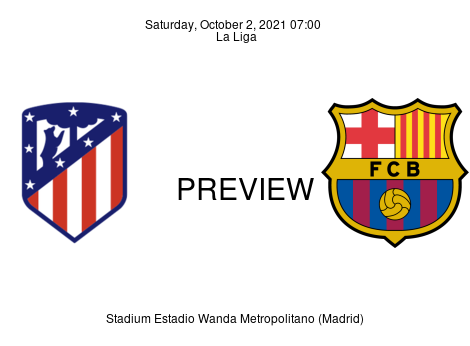 The LaLiga Santander Matchday 8 fixture, Atletico Madrid vs. FC Barcelona, kicks off at 20:00 (GMT+1) on Saturday, October 2, at the Wanda Metropolitano Stadium.

Preview Atletico Madrid returns to La Liga action after Tuesday’s UEFA Champions League 2-1 win over AC Milan. Once again, Atletico Madrid left it late, bagging both goals inside the last ten minutes of the game. - Courtesy of efforts from Antoine Griezmann (84’) and Luis Suarez (90+7’ P.). The hard-fought win against ten-men Milan came right after the 1-0 defeat to Alaves last weekend on LaLiga Matchday 7. An early effort from Victor Laguardia (4’) was enough to determine the outcome of the game. It was the first defeat in the league for the champions, which saw the club slip to 4th place. After seven games, ATM has 4W, 2D, and 1L, with the form: DWDWL, in the last five. The club has an average of 1.29 goals per game so far this season, having scored 9 goals in 7 LaLiga fixtures. In the first-third, ATM’s performance has seen them concede 6 goals (0.86 goals conceded per game) over the course of the season, leaving the club with a G.D. of +3. A 4—4—2 formation may be seen once again from Diego Simeone with Suarez and Correa in attack. Antoine Griezmann is expected to make another off-the-bench appearance on Saturday before the end of the game. Fortunately, Diego Simeone has a fully fit squad ahead of this important fixture against Barcelona.

Preview Barcelona made headlines after Wednesday’s 3-0 defeat to Benfica in the UEFA Champions League. Despite having more of the ball and putting more passes together, Barcelona could only muster a shot on target after eight attempts. The embarrassing defeat in the star-studded circle of champions comes after last weekend’s 3-0 win over Levante as a grim reality check. And as we speak, Barcelona are putting together a replacement at the helm. According to several reports, Ronald Koeman will be dismissed in the coming days, despite the backing from several players. The board appears to be keen on seeing the back of the Dutchman, with Barcelona president, Joan Laporta, shortlisting a few names which includes Andrea Pirlo and Roberto Martinez to replace the troubled 58-year-old. However, compensation of €12M would follow. With a game in hand, Barcelona is in 6th place with 12 points, having picked up 3W, 3D & 0L, while having the form: DWDDW. Koeman wouldn’t be present in the dugout on Saturday as he would be serving the second of his two-match suspension after being red-carded at the death in the game against Cadiz. A 4—3—3 formation with the trio consisting of De Jong, Coutinho and Depay is expected against Atletico Madrid.