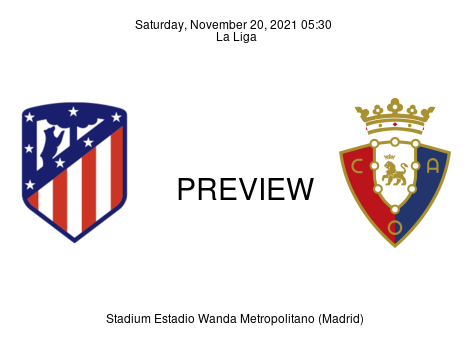 Club Atlético de Madrid, S.A.D. vs. CA Osasuna kicks off at 18:30 (GMT+1) on Saturday, November 20, at the Wanda Metropolitano Stadium.

Preview Atlético Madrid picked up a disappointing 3-3 draw against Valencia at the Mestalla Stadium, with 37,472 spectators in the stands, right before the World Cup qualifying round. Goals from Luis Suarez (35'), Antoine Griezmann (58'), and Sime Vrsaljko (60') saw ATM bag three goals in a few minutes over the hour mark. However, an own goal from Stefan Savić (50' O.G.) had left the door open for the Bats. A brace from Hugo Duro (90'+2, 90'+6), inside stoppage time, saw ATM’s two-goal lead evaporate in a space of four minutes. Diego Simeone had no one but himself to blame after a string of substitutions had left the team’s chemistry disrupted. Lots of times, the manager gets it right, but this time I failed, Simeone said right after the game. However, Atletico Madrid remains unbeaten in five games: WDDWD, and are in 4th place on the table despite having one game in hand. The club has 23 points after 6W, 5D, & 1L. Focusing on the numbers, Atletico Madrid has a goal ratio of 1.75 g.p.g., having scored 21 goals in 12 La Liga games. They have also conceded 13 goals (an average of 1.08 goals conceded per 90) and have a goal difference of +8. Diego Simeone will look to get it right on Saturday when he emerges alongside Atletico Madrid with a probable 3—4—2—1 formation. Luis Suarez could be playing ahead of the attacking duo once again. João Félix (calf injury) and Kieran Trippier (shoulder injury), who was forced off in the game against Valencia, are ruled out of this fixture.

Preview Osasuna picked up a 2-0 defeat to Real Sociedad about a fortnight ago at El Sadar. Goals from Merino (72') and Januzaj (82' P.) were enough to condemn Osasuna to back-to-back defeats: WDDLL. However, Los Rojillos kept their spot in 7th place at the end of Matchday 13, having 19 points after 5W, 4D, & 4L. A narrow margin keeps Jagoba Arrasate’s side inside the top ten. With a goal ratio of 1.08 goals scored per game, Osasuna has bagged 14 goals in 13 La Liga games. In addition, the club has conceded 17 goals (an average of 1.31 goals per match) so far this season and has a G.D. of -3. For this difficult match against Atlético Madrid, Jagoba Arrasate may opt for the 4—2—3—1 formation with Kike in attack. Aridane Hernández’s availability remains shrouded in mystery due to a muscle injury.