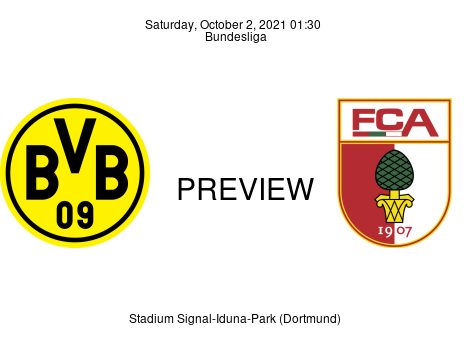 The German Bundesliga fixture, Borussia Dortmund vs. FC Augsburg, kicks off at 14:30 (GMT+1) on Saturday, October 2 at Signal Iduna Park.

Preview Ten-men Dortmund picked up a victory over Sporting CP in Tuesday’s UEFA Champions League fixture. A single goal from Donyell Malen (37’) decided the outcome of the game. However, they earned no points last weekend, having lost by a solitary goal to Borussia Moenchengladbach. Denis Zakaria (37’) scored the game’s only goal, three minutes before Dortmund’s Mahmoud Dahoud (R. 40’) left the pitch after his second yellow. It was the second defeat for Dortmund in five games: LWWWL, and it leaves the club in 4th place, having 12 points after 4W, 0D, & 2L. With an average of 2.83 goals per game, Dortmund has netted a total of 17 goals in six Bundesliga games, 7 of them from Haaland, leaving him at the top of the Bundesliga scorers' chart alongside Bayern’s Robert Lewandowski who also has a tally of 7. Dortmund has conceded 12 goals (an average 2 g.c.p.g), which leaves the Black and Yellows with a G.D. of difference of +5. Having suffered a defeat on his return to Gladbach last weekend, Marco Rose aims for a quick turn-around in fortunes. Erling Haaland returns to the squad after last weekend's defeat and is in the run for a start in Rose’s 4—2—3—1 formation. His return could force Tuesday's hero, Donyell Malen, to the bench. Riddled with injuries, Dortmund could be without as many as seven players. Can (thigh) and Coulibaly (knee) are ruled out, while Dahoud is suspended. The likes of Morey (knee), Reyna (thigh), and Schmelzer (knee) will also be unavailable for this game while Tigges remains sidelined with a thigh injury.

Preview Augsburg occupies 15th place on the Bundesliga table, with 5 points after 1W, 2D, & 3L. The club picked up a 3-0 defeat to SC Freiburg last weekend at the Dreisamstadion, leaving the visitors with a form that reads: DLDWL, ahead of this fixture against Dortmund. Speaking on conversions, Augsburg has a very poor average of 0.33 goals per game, hitting the back of the net only twice in a total of six games. Fuggerstädter have conceded 11 goals (an average of 1.83 goals-per-match) over the course of the Bundesliga season and have a goal difference of -9. On Matchday 7, manager Markus Weinzierl could utilize the 3—1—4—2 formation. Following the absence of Niederlechner (groin), the duo of Andi Zeqiri and Rubén Vargas is expected to start in attack against Dortmund. On availability, Hahn (ill), Iago (shoulder), and Moravek (groin) are all ruled out.