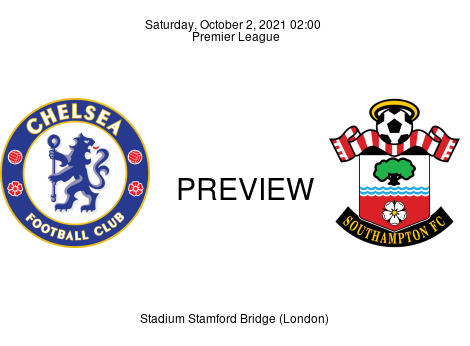 The English Premier League returns in Match Week 7 after 60 games and 160 goals. Michail Antonio, Salah and the tricky fox, Jamie Vardy, share the spoils at the top of the goal scorers' chart with 5 goals apiece while a stingy Paul Pogba sits alone at the top of the assists' chart with a haul of 7. Meanwhile, City's Ederson holds the entire attack in the Premier League to ransom with five clean sheets. Liverpool sits atop the table while Norwich is at the other end. On Saturday, Oct. 2nd, the Blues and the Saints will cross swords for the 45th time in another episode of their rivalry, this time in Stamford Bridge at 15:00 (GMT+1). Referee Martin Atkinson will be in charge while Peter Kirkup and Nick Hopton will be assisting. Mike Dean will be at the controls for a closer look at the VAR room.

Preview Chelsea lost to Juventus by a lone goal in Wednesday's UEFA Champions League fixture at Juventus Stadium. Last weekend, the Blues picked up their very first defeat of the season in another 1-0 loss to Premier League champions Manchester City. The Blues looked like a shadow of themselves, totally clipped back by the Cityzens and unable to pose any threat throughout the length of the game. Romelu Lukaku was cancelled out, leaving Chelsea without a single shot on target after ninety minutes. Under the barrage of sky-blue fire, Thomas Tuchel's men had held on until a moment of quality from Gabriel Jesus in the 53rd minute established a barrier between both sides. The defeat saw Chelsea drop to 3rd place while having the form, WDWWL. With 13 points after 4W, 1D, & 1L, thanks to an average of 2 goals per game, the Blues remain the 3rd highest scoring side in the league alongside City and Everton, having scored 12 goals in six appearances. Conceding twice, Chelsea has a G.D. of +10. Tuchel aims to bounce back quickly and the game against the Saints could present the right opportunity to do so. The 3—5—2 formation with Lukaku and Kai Havert in attack is expected. Lukaku has a haul of nine goals in 12 Premier League matches against the Saints, - a career record high. Against no other side has he scored more goals in the Premier League. The Blues could be without Reece James, who picked up an injury in the 1-0 loss to Manchester City last weekend. Mason Mount and Christian Pulisic are also in doubt for this fixture.

Preview Without a win in five games, DDDDL, Southampton has only 4 points from 0W, 4D, & 2L. Last weekend, the Saints lost by a lone goal to Wolves, courtesy of Raul Jimenez's brilliance. Having an average of only 0.67 goals scored per game after six games, the Saints occupy 16th place. The club also has an average of 1.17 goals-conceded-per-match. Ralph Hasenhüttl's 4—4—2 could see Adams and Armstrong in attack once again on Saturday. Adam Armstrong has more shots than any other player in the Southampton shirt this season, 19 and aims for his second goal of the new campaign against Chelsea.