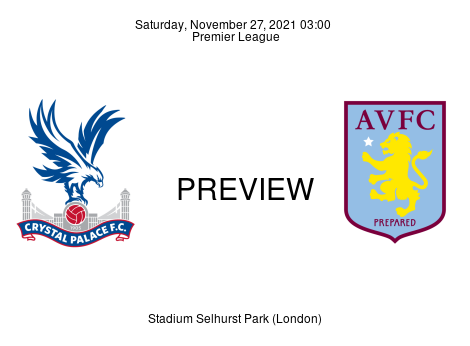 Crystal Palace vs. Aston Villa kicks off at 16:00 (GMT+1) on Saturday, November 27, at Selhurst Park. Referee Michael Sailsbury will have the luxury of officiating this game while the assistants, Ian Hussin and Wade Smith, will lend a helping hand. The fourth official, Martin Atkinson, will have his watchful eyes on the proceedings from the sidelines, while VAR Paul Tierney will be at the monitors.

Preview Crystal Palace were denied a win against Burnley after a 3-3 draw in a topsy-turvy six-goal thriller against the Clarets at Turf Moor last Saturday. Benteke (8') crashed his effort against the woodwork before it crossed the line for a Palace lead. Minutes later, Ben Mee (19') restored parity with a towering header. Chris Wood (27') gave Burnley the lead before Conor Gallagher pulled out a rabbit from the hat in the shape of a remarkable assist for Benteke (36') to see both sides level once again. Marc Guehi (41') bagged his maiden goal for the club to put Palace back in front just before the break. However, four minutes after the interval, the game took another dramatic turn as Maxwel Cornet (49’) crashed a vicious left-footed volley into the roof of the net. It was a crazy game, Vieira said. I think it's just about how we concede, giving away those set-pieces, the 45-year-old added, conceding to the fact that more work has to be done on the defensive end of the pitch. After a slow start to the season, it appears to be coming together for new boss Patrick Vieira, whose side remains unbeaten in five EPL games: DDWWD, while in 10th place. The club has 16 points after 3W, 7D, & 2L. A win on Saturday would move the Eagles inside the top ten if either Manchester United (8th), who have a difficult fixture against Chelsea, or Brighton (9th), who take on Leeds, fail to win at the weekend. An attacking 4—3—3 formation with Benteke as the focal point upfront is expected against Villa.

Preview Steven Gerrard got off to a flying start with Aston Villa, having picked up a 2-0 win over Brighton & Hove Albion on his coaching debut with the club. Goals from Ollie Watkins (84') and Tyrone Mings (89') settled the duel of ninety minutes at Villa Park. The club moved one spot ahead from 16th to 15th place on the Premier League table, having picked up 13 points from 4W, 1D, & 7L. The victory put an end to a five-game losing streak: LLLLW. If anyone doubted what it means to be being in that position, just watch me after the goals, an elated Steven Gerrard said over his appointment as Villa’s coach after the game. A 4—3—3 formation with Danny Ings, Ollie Watkins, and Emiliano Buendía is expected for this fixture against Palace.