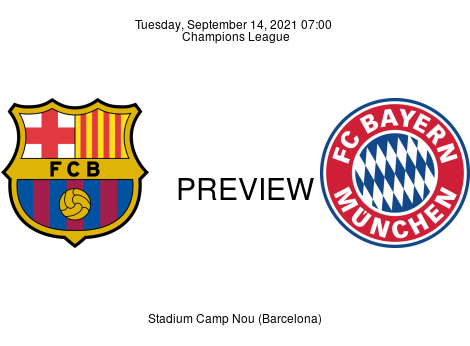 The UEFA Champions League returns with one of the most anticipated matches of Matchday 1, UCL Group E fixture, F.C. Barcelona vs. F.C. Bayern Munich, scheduled for 20:00 (GMT+1) on Tuesday, September 14 at Camp Nou.

Preview Having had the game against Sevilla postponed, the five-time UEFA Champions League winner, F.C. Barcelona will make their entrance into this contest of champions after last month's 2-1 win over Getafe. An aggregate 5-2 defeat to PSG in the Round-of-16 saw the club exit the tournament last season. On Tuesday, a different Barcelona side will be seen against the German champions. A squad very different from the side which suffered the famous 8-2 demolition at Camp Nou. As if that wasn’t enough, the official Bayern Munich account on Twitter teased Barcelona right after the Champions League draws. Barcelona share Group E with SL Benfica, FC Dynamo Kyiv and, of course, the German champions. Perhaps the mischievous gesture would set the wheels of revenge in motion when both sides meet in what would be the 9th episode of their rivalry in the Champions League. On Tuesday, Ronald Koeman could line up the 4—4—2 formation with the duo consisting of Martin Braithwaite and Memphis Depay in attack. Meanwhile, the center-backs, most especially, Gerard Pique will have his hands full with the responsibility of keeping Robert Lewandowski quiet. The Pole needs no introduction, but a recent video analysis of the striker's 28 goals last season, - from the official Bundesliga YouTube channel, reveals his preferred scoring position is right between the centre-backs and around the penalty spot. Furthermore, 89% of them required no more than two touches. Barcelona will be without Sergio Aguero (calf injury) and Ousmane Dembélé (hamstring injury) for this fixture. Looking ahead, the club will take on Benfica on Matchday 2, Sept. 29, at the Estádio da Luz.

Preview Bayern Munich will make their return to the Champions League after Saturday's 4-1 victory over RB Leipzig. Die Roten continue to enjoy domestic success, sitting in 2nd place on the Bundesliga table with five consecutive victories across all competitions: WWWWW. The club makes an entry into this clash of the titans with a psychological edge over the Spanish side. This will be Nagelsmann's UEFA Champions League debut with Bayern and the aim will be to start with a win when he lines up the familiar 4—2—3—1 formation. As expected, Lewandowski will be at the top of the shape. The Pole scored his sixth league goal for Bayern Munich in the 4-1 win over Leipzig on Saturday. Bayern are well covered in attack. However, Memphis Depay's quick feet, speed and uncanny appetite to run directly at the opposition's defense could spell trouble for the German champions on Tuesday. Dayot Upamecano and Niklas Suele will likely have the shared responsibility of keeping the Dutchman quiet. Kingsley Coman remains in doubt for this fixture, having suffered a calf injury. Bayern will host Dynamo Kyiv at the Allianz Arena on Matchday 2, Sept. 29.