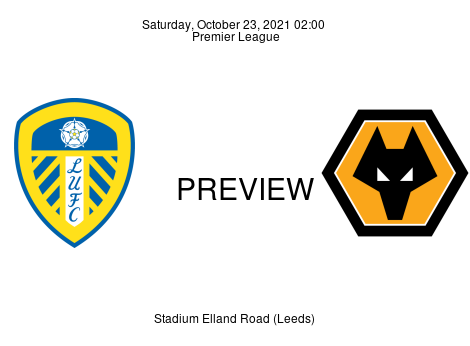 Leeds United vs. Wolverhampton Wanderers kicks off at 15:00 (GMT+1) on Saturday, October 23, at Elland Road. Referee Robert Jones will be in charge, while the assistants, Darren Cann, and Mark Scholes will lend a helping hand. Fourth official Mike Dean will be on the sidelines while Peter Bankes will be carefully hidden away in the VAR room.

Preview Unlike last season, Leeds United continues to struggle with form as they sit at the bottom end of the table with only one victory in five games: LDLWL. On Premier League Matchday 8, the Peacocks suffered another huge blow to their campaign, losing to Southampton by a lone goal at St. Mary’s Stadium. A well-executed counterattack saw Leeds beat a hasty retreat as Nathan Redmond raced away unchallenged to unselfishly tee-up Armando Broja (53’) for what would be the only goal of the game. Following the defeat, Leeds dropped one spot from 16th to 17th place, while having 6 points after 1W, 3D, & 4L, with four of those coming from the last five games. Furthermore, six points in eight matches signals Leeds' worst start to a Premier League campaign since the 1988/89 season. On the numbers, Leeds have a goal ratio of 0.88 goals per game, having scored 7 goals in eight Premier League games. The club has conceded an unimpressive haul of 15 goals (1.88 gcpm), and has a goal difference of -8. A 5—4—1 formation, with Rodrigo in attack, may be seen from Marcelo Bielsa against Wolves on Saturday. Patrick Bamford remains doubtful for this fixture alongside Luke Ayling.

Preview Mid-table Wolves picked up a hard-fought 3-2 win over Aston Villa at Villa Park last weekend. Wolves had a two-goal deficit eight minutes after the hour, but two quick goals, from Romain Saiss (80') and Conor Coady (85') saw Wolves restore parity before grabbing the late-winner minutes into stoppage time, through Ruben Neves (90’+5). The spirited performance in the five-goal thriller saw Wolves jump two spots from 12th to 10th place on the Premier League table, having picked up 12 points from 4W, 0D, & 4L. It was the third victory in a row for the club: WLWWW. With eight goals in as many appearances, Wolves have an average of one goal scored per game. However, the club has let in as many goals, 8. It took a while to impose his ideas on the squad, but Bruno Lage is fast becoming a fan favorite with the recent patch of victories. An attacking 4—2—3—1 formation could be seen from the Wolves’ boss, on Saturday, with Jimenez returning to the starting line-up at the top of the shape. Pedro Neto is ruled out alongside Jonny Otto while the availability of Francisco Trincão remains in doubt.