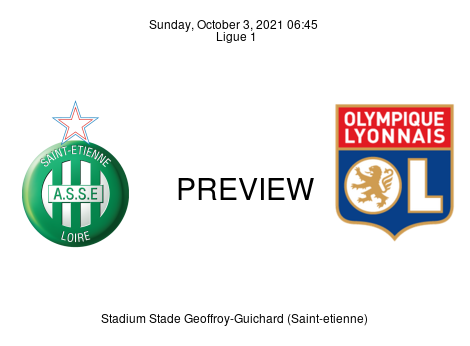 The French Ligue 1 fixture, AS St-Etienne vs. Olympique Lyon, kicks off at 19:45 (GMT+1) on Sunday, October 3 at the Stade Geoffroy-Guichard.

Preview Having no business with continental football, St-Étienne returns after last weekend’s 3-0 defeat to OGC Nice on home soil. The defeat left the green-striped ones with five consecutive defeats, LLLLL, and at the bottom of the table. In 20th place, and feeling the pressure, Claude Puel understands his grip on the job dangles by a thread. The fans that have called for me to leave? That's just how it is, he said. I've experienced this kind of situation before. It's my duty to protect the interests of my team. Unlike our two previous matches [defeats to Monaco and Bordeaux], we never looked in it against Nice, the 60-year-old Frenchman added. Having only 3 points after 0W, 3D, & 5L, Puel will aim for at least a draw on Sunday in an attempt to gradually steer his side out of the troubled waters. However, with an average of only 0.88 goals scored per game, Saint-Étienne could struggle once again, this time against an attacking-minded Lyon. Behind Clermont Foot with 19, Saint-Etienne is the second-highest conceding side in the league, having conceded 17 goals in eight appearances. On Sunday, Puel will make an attempt to plug the leak in defense with a defensive 5—4—1 formation, or its close variant, a 4—5—1 with Jean-Philippe Krasso playing alone at the top of the design.

Preview The Kids return after Thursday’s UEFA Europa League 3-0 victory over Brondby IF, which featured a brace from Karl Toko Ekambi (64’ & 71’). Last weekend, ten-men Lyon salvaged a point against Lorient at the Parc Olympique Lyonnais, with the goal coming from Karl Toko Ekambi (50’), five minutes after the break. The draw was the first in five games for Lyon, WWLWD, leaving the club in 7th place and with 12 points after 3W, 3D, & 2L. Lyon have 13 goals after eight Ligue 1 games. An average of 1.62 goals scored per game. At the other end, Les Gones have conceded 12 goals and hence, have a goal difference of +1. On Matchday 9, Peter Bosz could line up the squad in a 4—3—3 formation against St-Étienne. Riddled with injuries, the club could be without as many as four key players. Moussa Dembélé and Lenny Pintor have both been ruled out of this match, while Islam Slimani remains in doubt for this game alongside Tino Kadewere. Lucas Paquetá found himself leading the attack against Brondby on Thursday following the unavailability of more suitable options. The Brazilian midfielder could be doing so once again on Sunday.