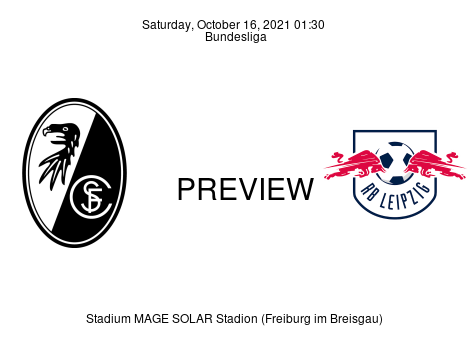 The German Bundesliga match between SC Freiburg and RB Leipzig kicks off at 14:30 (GMT+1) on Saturday, October 16, at the Europa-Park Stadion.

Preview The home side utilized the international break to take on FC St. Pauli in a club-friendly match last Thursday on the 7th of October. Freiburg picked up a 3-0 win over the 2.Bundesliga side. On Matchday 7, SC Freiburg defeated Hertha Berlin 2-1 at the Olympiastadion Berlin in front of 18,376 spectators. A fine header from Philipp Lienhart (17') had Freiburg in the lead at the break. Later into the second half, Piatek (70') leveled the scoreline for Berlin with his first goal of the season, having come off the bench. Both sides appeared to be heading for a draw, but a remarkable moment of quality from another second-half substitute, Nils Petersen (78') grabbed the late winner for Freiburg. It was Petersen's 30th goal off the bench in his 250th Bundesliga appearance. The deserved win left Freiburg with three victories in five games: WDDWW, and in 4th place while having 15 points. Unlike Wolfsburg’s Mark van Bommel, the fairytale run continues for Christian Streich’s side as they remain unbeaten since the turn of the new season: 4W, 3D, & 0L. Freiburg have kept their average goal ratio at 1.57 goals per game, having scored 11 goals in 7 Bundesliga games. After conceding 5 goals (0.71 goals conceded per game), the club has a G.D. of +6. Considering the attacking prowess of the Red Bulls, Streich could utilize the defensive 5—4—1 formation once again, leaving Lucas Höler solely with the responsibility of finding a goal or two. A draw would be good enough for Freiburg to keep the unbeaten run intact at the end of Matchday 8. With the exception of Schmid, who remains unfit, Christian Streich will have all his players available for this fixture.

Preview Leipzig are in 8th place on the Bundesliga table, having picked up 10 points from 3W, 1D, & 3L. On Matchday 7, the Red Bulls put VfL Bochum aside after a 3-0 win over the visitors. Leipzig also took part in a club-friendly over the international break but lost to Śląsk Wrocław, 2-1. With back-to-back Bundesliga victories, LLDWW, Jesse Marsch’s side aims to give Freiburg a reality check and end their status of being the only unbeaten side in the league this season. And despite the slow start to the season, Leipzig have the numbers to do so. The Red Bulls have 15 goals after just seven Bundesliga appearances, an average of 2.14 goals scored per game. Also, Die Roten Bullen have conceded only seven goals so far (1 goal per game), leaving the club with a G.D. of +8. On Saturday, Jesse Marsch could emerge alongside the Red Bulls with the 3—4—2—1 formation, leaving Yussuf Poulsen to shoulder the goal-scoring responsibilities once again.