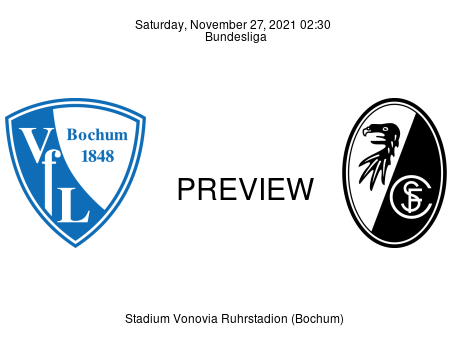 Preview Bochum picked up a narrow defeat, having lost by a lone goal to Bayer Leverkusen last Saturday with 22,500 spectators in attendance at BayArena. Despite producing as many as 19 shots in total over the length of the ninety – a record high for the club this season – Bochum were unable to find the net. Leverkusen’s Amine Adli (3') bagged his maiden goal in Bundesliga inside the first five minutes of the game, which eventually was the only goal of the match. The defeat was the second for Bochum in five games: WWLWL, and it saw the club move one spot lower from 12th to 13th place. Having failed to pick up a point, Bochum have 13 points in total from 4W, 1D, & 7L. On the numbers, the club has a goal ratio of 0.83 g.p.g. this season, having scored 10 goals in twelve Bundesliga appearances. They have also conceded 19 goals and have a G.D. of -9. An average of 1.58 goals conceded per game. A win for Thomas Reis’ side could see Bochum move closer to the top ten if 12th-placed Köln and 11th-placed Frankfurt fail to win against Borussia Mönchengladbach and Union Berlin, respectively. Reis is tipped to start with the 4—3—3 formation against Freiburg, with Asano, Polter, and Christopher Antwi-Adjei in attack. On availability, Zoller (knee) is ruled out, along with Manuel Riemann (thigh injury), while Saulo Decarli’s availability remains shrouded in mystery.

Preview Freiburg held on to 3rd place despite picking up a 2-0 defeat to Eintracht Frankfurt at the Europa-Park Stadion on MD12. Goals from Jesper Lindstrøm (34') and Filip Kostic (43’) settled the duel of ninety minutes after Freiburg failed to hit the back of the net despite taking 21 shots. Freiburg returns with back-to-back defeats, DWWLL, and 22 points from 6W, 4D, and 2L, after having their season-long unbeaten streak ended by Bayern Munich on MD11. The club also has 18 goals after 12 Bundesliga games. With a goal ratio of 1.5 goals scored per game, the Breisgau Brazilians have also conceded 11 goals so far this season and have a G.D. of +7. A club average of 0.92 goals conceded per match keeps Freiburg inside the top four. Christian Streich aims to recover that sparkling winning form that saw Freiburg go 10 Bundesliga games without a defeat. A 3—4—3 formation with Jeong, Höler, and Grifo in attack is expected from the 56-year-old for this game against Bochum. Nils Petersen (knee) remains doubtful while Jonathan Schmid continues his struggles to attain match fitness.