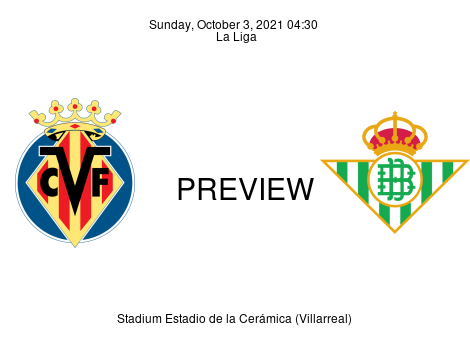 Preview Villarreal lost to Manchester United, 2-1, in Wednesday's UEFA Champions League fixture at the Theater of Dreams. A last-gasp effort from United's Cristiano Ronaldo (90'+5) eventually separated both sides after Alex Telles (60') had levelled the scoreline at the hour. Last weekend in LaLiga, the Yellow Submarine picked up a goalless draw against Real Madrid. Despite having 2 shots on target and 52% of the ball, Villarreal were unable to find a way past Los Blancos while doing enough to limit Madrid's opportunities in front of goal. The draw leaves Villarreal in 11th place on the Spanish LaLiga table, having picked up 8 points from 1W, 5D, & 0L. Villarreal remains unbeaten, albeit with only one victory after six games, DDDWD. The club has a game in hand, against Deportivo Alaves, which was postponed due to the international schedule. Villarreal has six goals in six La Liga games, but have conceded three goals so far, which leaves the club with a goal difference of +3. Unai Emery could emerge with a 4—3—3 formation, with Paco Alcácer, who bagged Villarreal's only goal in the game against Manchester United in the UEFA Champions League, in the middle of attack. Meanwhile, Yéremi Pino and Arnaut Danjuma could be on the flanks for Villarreal. The Nigerian international, Samuel Chukwueze remains sidelined with a hamstring injury and is ruled out for this fixture against Betis.

Preview Real Betis will also be making a return to La Liga action following Thursday's Europa League 3-1 win over Ferencvaros at the Groupama Arena in Budapest, Hungary. An own goal from Henry Wingo (75' O.G.), coupled with goals from Nabil Fekir (17') and Cristian Tello (90+5') were enough to decide the game's outcome despite a 44th-minute strike from Ferencvaros' Myrto Uzini. Last weekend, Real Betis put bottom-placed Getafe aside in a 2-0 win. The victory saw Real Betis move to 8th place with 12 points after seven games, 3W, 3D & 1L. Betis will be heading into this fixture after back-to-back domestic victories: LWDWW, and on Match Day 8, the Greens will try to replicate last weekend's form and pick up another victory to make it three in a row.  Manager Manual Pellegrini is tipped to adopt the attacking 4—2—3—1 formation, which could see Borja Iglesias leading the attack. On availability, the Glorious Ones could be without right-back Youssouf Sabaly, who is currently sidelined with a hamstring injury. Víctor Ruiz and Diego Lainez are also in doubt for this fixture.