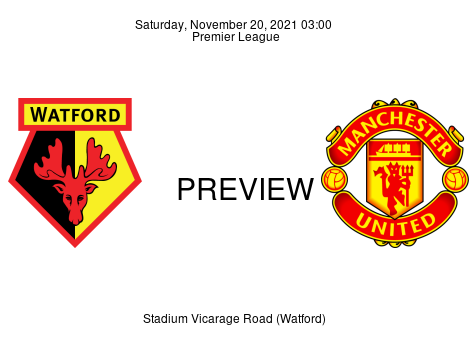 The Hornets take on the Red Devils at 16:00 (GMT+1) on Saturday, November 20, at Vicarage Road, in search of their second victory under new boss Claudio Ranieri. Referee Jonathan Moss will have the assistants, Marc Perry and Timothy Wood, give him a helping hand throughout the length of this game. The fourth official, Dean Whitestone, will be in communication with the crew from the sidelines, while David Coote will be carefully tucked away in the VAR room.

Preview Watford suffered their second defeat in a row: LLWLL, following the 1-0 loss to Arsenal just before the international break. A single effort from Emile Smith Rowe (56') condemned Claudio Ranieri to defeat on his 4th day on the job, leaving him with a 25% win rate so far. The defeat at the visit to the Emirates saw the Hornets drop one spot from 16th to 17th place, having picked up only 10 points after 3W, 1D, & 7L. Yet to impose his ideas on the team, another defeat at the hands of the Red Devils could see Claudio Ranieri’s side in the red zone should Burnley surprise Crystal Palace at Turf Moor on Saturday. Claudio Ranieri must fix the defense to see any form of improvement from his side. The Hornets have conceded at least once in each of their last 21 Premier League games, making it their longest ever run without a clean sheet in the top flight. They have conceded 19 goals (an average of 1.73 goals conceded per 90) and have a G.D. of -7. A 4—1—4—1 formation with Joshua King in attack is expected from Claudio Ranieri against Manchester United on Saturday.

Preview According to multiple reports, Manchester United have made an internal decision to replace Ole Gunnar Solskjær in the coming days following morale-crushing home defeats to Liverpool and Manchester City. One more loss could see the axe chop the 48-year-old, who has been in charge since December 19, 2018, with a 54% win rate after 167 competitive games (91W, 37D, & 39L). Brendan Rodgers is being tipped for the job at United, with unconfirmed reports suggesting contact between the board and the manager. However, it appears unlikely that the Leicester City boss will leave the Foxes midway through the season should Ole get the boot. The 2-0 defeat to Manchester City saw United move one spot lower from 5th to 6th place on the Premier League table, having picked up 17 points from 5W, 2D, & 4L. United have only one victory in five games: DLLWL. On Saturday, the 3—5—2 formation with Ronaldo and Mason Greenwood in attack is expected once again. Paul Pogba (red card suspension, 1 game) picked up a thigh injury while on international duty. Édinson Cavani (tendon injury) and Raphael Varane (hamstring) are also ruled out, while Luke Shaw remains doubtful for this fixture.