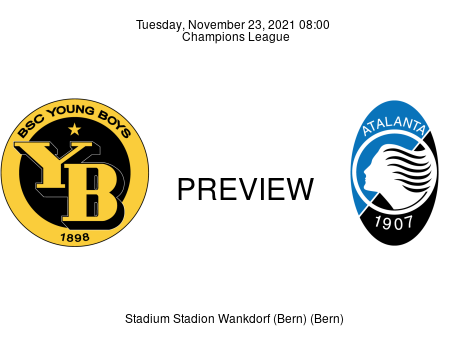 Following the 1-0 defeat to the Italians on UEFA Champions League Matchday 2, BSC Young Boys meet Atalanta B.C. once more, as they plot revenge while seeking to overturn a torrid run of form on European soil. Referee Daniel Siebert (GER) will be in control of the game for the length of the ninety, plus extra-time after kickoff at 21:00 (GMT+1) on UCL Matchday 5, Tuesday, November 23, at the Stade de Suisse.

Preview In dire need of a win, Young Boys are rooted to the bottom of Group F with 3 points after 1W, 0D, & 3L following the 2-0 defeat to Villarreal on UCL MD4. The loss left BSC YB with three consecutive defeats on European soil (WLLL) after four days. Villarreal’s Étienne Capoue (36’) tucked away the rebound from an initial effort, as he bagged his second goal for the club to leave Young Boys with a one-goal deficit six minutes past the half-hour mark. A few minutes later, Young Boys thought they had the leveler, but a VAR check chalked off the goal for offside. Both sides came close to hitting the back of the net, but it was the cobra, Arnaut Danjuma (89'), that struck and eventually snuffed the life out of BSC Young Boys with a minute left on the clock. And as expected, it was followed by a snake-styled celebration. David Wagner understands that his team must win to remain in contention for a last-16 berth without the help of other results. The Swiss side will be condemned to a fourth-place finish if they pick up a defeat on Tuesday. David Wagner, 49, is expected to adopt the 4—4—2 formation with the attacking duo of Theoson Siebatcheu and Meschack Elia. Riddled with injuries, the club could be without as many as six players. In addition, if booked, Michel Aebischer and Vincent Sierro will miss the next game.

Preview Atalanta picked up a 5-2 win over Spezia in the Italian Serie A at the weekend and have back-to-back victories in five games across all competitions: WDDWW. Having 5 points after 1W, 2D, & 1L, third-placed Atalanta are also in dire need of a win to remain in contention for a top-two finish in the group. On UCL Matchday 4, the Italians picked up a 2-2 draw against Manchester United, despite taking the lead twice in the game, only to be undone on each occasion by Cristiano Ronaldo (45’+1 & 90’+1). On Tuesday, Gian Piero Gasperini could line up the 3—4—3 or its variant, the 3—4—1—2, with Duvan Zapata and Josip Iličić forming part of the attack in either of the two options. Atalanta's Matteo Lovato, Robin Gosens, and Hans Hateboer remain in doubt for this fixture against Young Boys. Meanwhile, if booked, De Roon will miss the next game.