Photo by Diego Souto/Quality Sport Images/Getty ImagesHe will remain at the Mestalla through 2026. Yunus Musah will continue at the Mestalla for quite a while. The 18-year-old midfielder signed a contract extension with Valencia CF today that will keep him with the club through the 2025-2026 season. Musah broke into the first team this year in a bi[...]
Read More
STARSANDSTRIPESFC.COM

Asamoah Gyan: Yahaya Mohammed has a word of advice for Ghana legend The Aduana Stars forward shares his thoughts about how the former Sunderland man can succeed in the GPL
Read More
GOAL.COM

Photo by S. Mellar/FC Bayern via Getty ImagesThe Bayern Munich wonderkid adds another accolade to his already illustrious career. Alphonso Davies has been named the 2020 Canadian Player of the Year, a result that very few would be willing to argue. This is Davies’ second win in three seasons, which followed his record-setting year with Bayern[...]
Read More
BAVARIANFOOTBALLWORKS.COM The young centre-back is likely to play for his new side for the first time on Monday against Brighton and Hove Albion
Read More
GOAL.COM The Ghana and Cameroon internationals were among the goals as the Black Eagles began the weekend with a win
Read More
GOAL.COM The 30-year-old wants to have more of an impact on the Jack Army's push for elite division football
Read More
GOAL.COM

Ghanaian government under the leadership of President Nana Addo Dankwa Akufo-Addo has instructed for the release of a staggering GH¢900,000 to the 18 clubs in the Ghana Premier League.
Read More
PANAFRICANFOOTBALL.COM

Arsenal fans have been celebrating after Mikel Arteta hinted last night that Thomas Partey could well be fit for the Spurs clash this weekend. The Ghana midfielder has been missing for the last few weeks and was expected to be out longer than initially anticipated. However, speaking following the win over Rapid Vienna, Arteta confirmed […] T[...]
Read More
TBRFOOTBALL.COM

ARSENAL will have plenty of time to ponder their 3-0 loss to Aston Villa as the Premier League heads into the international break. And to make matters worse, Thomas Partey went off injured at half time in the match. Follow ALL of the latest Gunners transfer gossip and news below…
Read More
THESCOTTISHSUN.CO.UK

Arsenal star Thomas Partey will return to training alongside his team-mates ahead of the north London derby with Premier League leaders Tottenham, according to Mikel Arteta. Partey has been sidelined with a thigh injury sustained in Arsenal’s defeat to Aston Villa at the beginning of November. The 27-year-old Ghana international had been trai[...]
Read More
SOCCERNEWS.COM 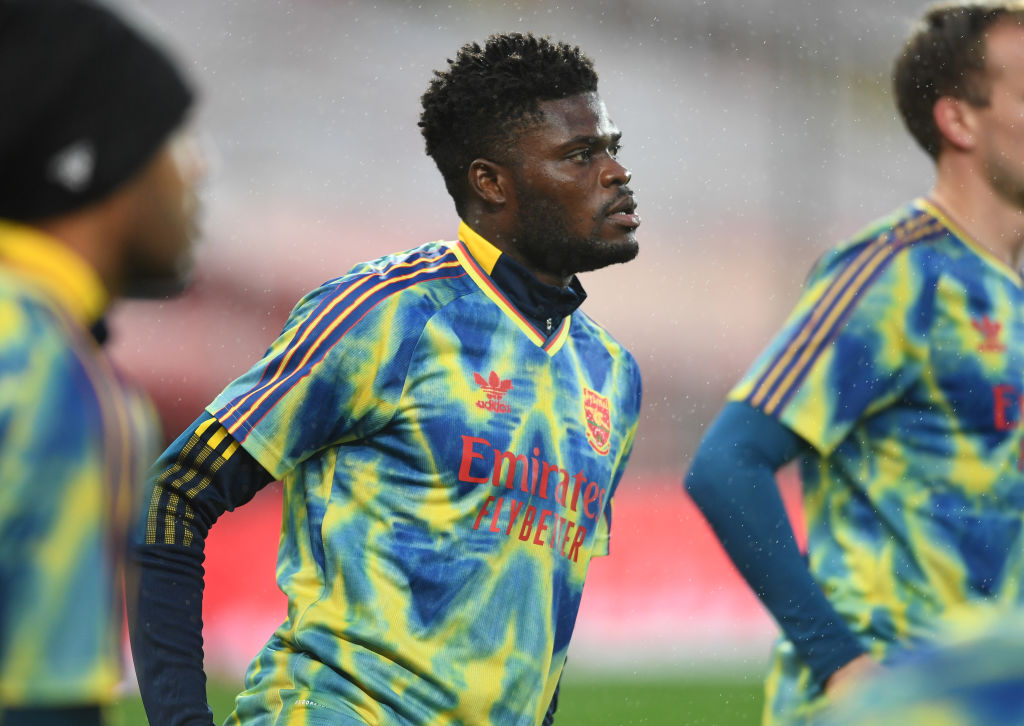 Will the Ghana midfielder feature in the north London derby?
Read More
METRO.CO.UK

‘We don’t know’: Mikel Arteta remains coy over fitness of 6’1 ace ahead of NLD

Mikel Arteta has remained coy over the fitness of Thomas Partey ahead of this weekend’s north London derby. Just after last weeks defeat at home to Wolverhampton Wanderers, the Spaniard seemed confident the Ghanaian would miss the ‘next few games’ following his injury during the Aston Villa clash. However, he now seems uncertain w[...]
Read More
VITALFOOTBALL.CO.UK The Foxes manager spoke about the rehabilitation of the centre-back in his team update ahead of Thursday's Europa League action
Read More
GOAL.COM

‘Partey gets around’: Paul Merson claims 5 foot 11 ace can return alongside Ghanaian

Paul Merson believes that Mesut Ozil’s Arsenal career could be resurrected but only if he is playing with summer signing Thomas Partey. The German was left out of both the Premier League and Europa League squad at the start of the season with Mikel Arteta citing ‘footballing reasons’. Speaking to Sky Sports, the former Arsenal [&h[...]
Read More
VITALFOOTBALL.CO.UK Partey eager to return from injury for Arsenal

Ghanaian midfielder Thomas Partey is set to undergo another scan before Arsenal know whether he will be available for Sunday’s north London derby.
Read More
PANAFRICANFOOTBALL.COM

Partey confusion Thomas Partey’s fitness has been of great concern to Arsenal, their fans and Mikel Arteta. The Ghanaian arrived for a £45 million fee and made an instant impact. The 27-year-old was key in Arteta earning Arsenal their first league win at Old Trafford since 2006 and away win against a ‘big 6’ side […]
Read More
101GREATGOALS.COM Former Tottenham, Leeds and England goalkeeper Paul Robinson has named Thomas Partey as the one player that Mikel Arteta needs to build his Arsenal team around. The Ghana international has looked a fine signing for the Gunners this season, having joined in a keenly-anticipated late move from Atletico Madrid in the summer. MORE: Arsenal ready t[...]
Read More
CAUGHTOFFSIDE.COM

The Ghanaian is facing a race against time to be available for the North London Derby
Read More
FOOTBALL.LONDON

Providing a proficient seasonal performance for Spezia, Ghanaian-Italian winger Emmanuel Gyasi (26) agreed on new contract with "The Little Eagles". Torino alumni is now on a deal with Serie A rookie side until June 2023.
Read More
TRANSFERMARKETWEB.COM

Daniel Nii Laryea has been selected for the 2020 Total African Nations Championship to officiate in the biennial tournament scheduled for Cameroon early next year.
Read More
PANAFRICANFOOTBALL.COM

‘If Partey plays, then so should Ozil’ – Arsenal’s snub of World Cup winner still stuns Merson The former Gunners star believes that the German playmaker would be the perfect option to provide ammunition alongside the Ghanaian enforcer
Read More
GOAL.COM

Ghana international Andre Ayew has been in fine form for the Swans
Read More
GAZETTELIVE.CO.UK

Arsenal and injuries: The evidence to suggest something is not quite right at the club with Thomas Partey set to miss several games

Injuries galore The news that detailed the extent of Thomas Partey’s new injury at the club was damning. The Ghanaian international arrived as a beacon of hope for the season. However, due partly to his injury, Arsenal have looked toothless in midfield and overrun. Granit Xhaka was turned easily in the game against Wolves which […]
Read More
101GREATGOALS.COM

Arsenal manager Mikel Arteta has confirmed the Ghana international Thomas Partey will miss the club’s ‘next few games’ as the thigh injury the midfielder sustained is worse than first feared. Thomas, a £45 million arrival from Atletico Madrid earlier this summer, was subbed at half-time in a 3-0 defeat to Dean Smith’s [...]
Read More
FOOTYEXTRAS.COM The 35-year-old striker talks about early life with the Royals and his expectations in the Ghana Premier League
Read More
GOAL.COM 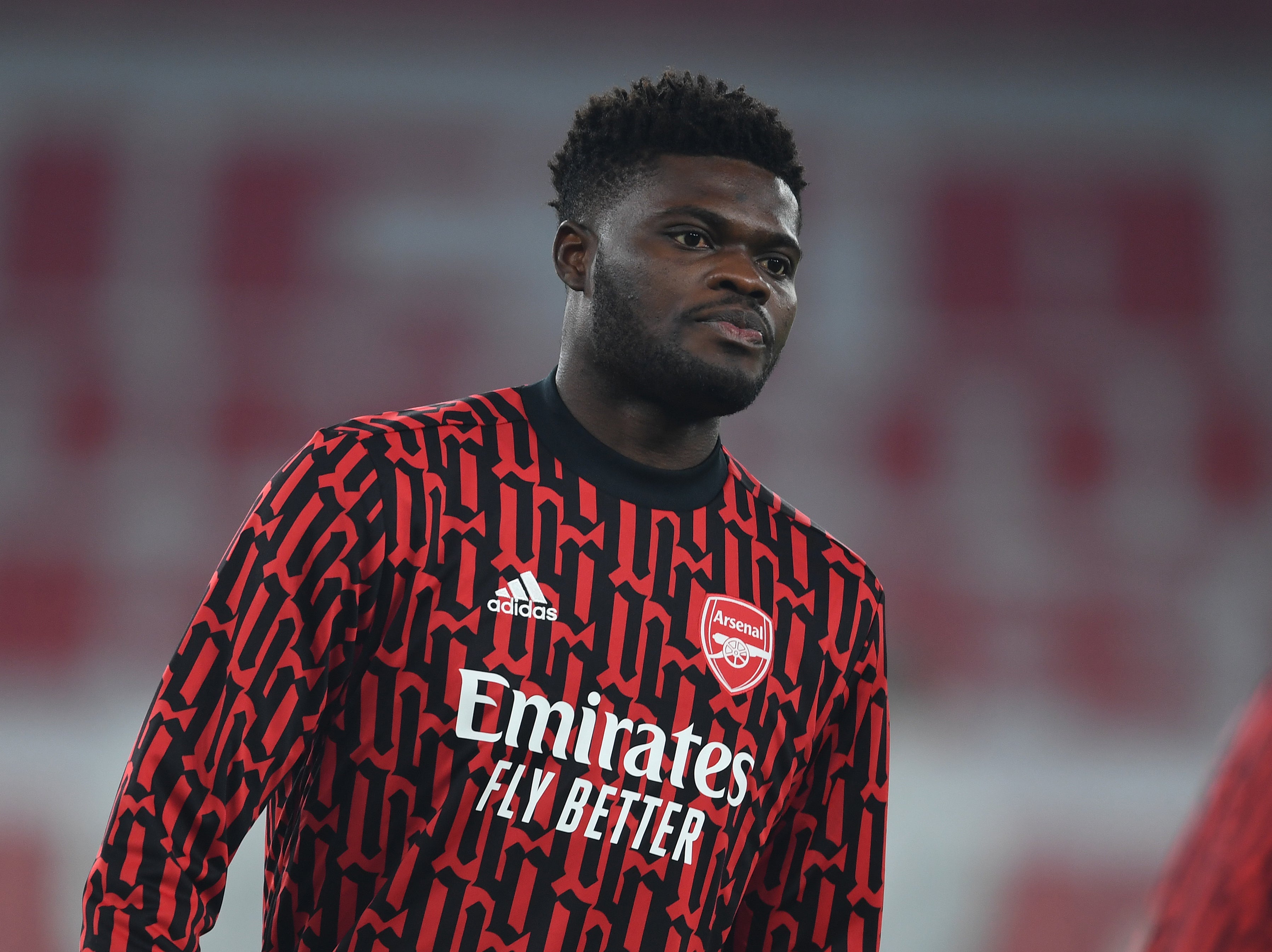 The Ghanaian midfielder has been out since 8 November
Read More
INDEPENDENT.CO.UK

Arsenal ace who has completed most dribbles set to miss next few games, says Arteta

Thomas Partey is due to miss the next few games after Mikel Arteta confirmed the latest surrounding the Ghanaian’s fitness following Arsenal’s 2-1 loss at home to Wolverhampton Wanderers. The former Manchester City coach also confirmed that the injury the midfielder suffered in the 3-0 loss at home to Aston Villa is worse than first [&h[...]
Read More
VITALFOOTBALL.CO.UK

Thomas Partey will miss Arsenal’s trip to Tottenham on Sunday after Mikel Arteta confirmed the midfielder will be out for a ‘few games’. Partey has been out since suffering a thigh injury during the early stages of Arsenal’s defeat to Aston Villa earlier this month and he was immediately withdrawn from the Ghana squad for [&[...]
Read More
FOOTBALL-TALK.CO.UK

Photo by VisionhausArsenal’s new midfield signing will be out for “a few games” according to Mikel Arteta. And the hits just keep on coming for the Gunners. In his postmatch press conference following Arsenal’s loss to Wolves, Mikel Arteta informed reporters that Thomas Partey’s thigh injury is worse than initially tho[...]
Read More
SBNATION.COM The 30-year-old Ghana star reflected on Sunday's away victory in the Championship
Read More
GOAL.COM The Porcupine Warriors and the Miners have their jobs cut out in the second leg fixtures of their first challenges of 2020-21 continental football
Read More
GOAL.COM

The Ghana international and the Anglo-Nigerian delivered fine performances for their respective clubs at City Ground
Read More
GOAL.COM

Ghana's all time leading goalscorer with 51 goals, Asamoah Gyan made his debut appearance in the GPL on Friday night and showed glimpses of his quality despite not being fully match fit.
Read More
PANAFRICANFOOTBALL.COM The 35-year-old spoke about his first game in the domestic league in 17 years
Read More
GOAL.COM

The 35-year-old took to the field for his new side on Friday, his first domestic game since 2003
Read More
GOAL.COM

Ghana’s shocking 1-0 loss to Sudan has had a negative impact on the west nation’s standing on FIFA world rankings as the Black Stars have fallen down by four places.
Read More
PANAFRICANFOOTBALL.COM The Blacks Stars have been negatively impacted by their loss to the Falcons earlier this month
Read More
GOAL.COM The West Africans profited from their numerical advantage to gain a comeback triumph over their visitors on Thursday evening
Read More
GOAL.COM

The veteran striker looks ahead to the matchday three duel against Medeama
Read More
GOAL.COM

Banouk condemns Ghana U20 women to double defeat against Morocco