Luton Town wanted Bristol City captain Bailey Wright but he will reportedly sign for League One Sunderland in the next 24 hours.
Read More
HITC.COM

It looks as if he’s seeking perfection. Which is a commendable stance to take it must be said, now he just needs to take that methodology and make sure the players actually implement it during games. Nottingham Forest ran out 3-1 winners against Luton Town yesterday, but they were made to sweat for it for […]
Read More
VITALFOOTBALL.CO.UK

LUTON TOWN have contacted Augsburg about taking Reece Oxford on loan. They have moved quickly in an attempt to steal a march on Middlesbrough who have also been tracking the former West Ham star. Getty - Contributor Oxford, 21, had been linked with a move to Dutch side VVV-Venlo earlier this month, but is now […]
Read More
THESUN.CO.UK

Nottingham Forest gave their promotion bid a boost by coming from behind to beat Luton Town at the City Ground.
Read More
SOCCERWAY.COM

“Getting his mojo back”: Lots of Forest fans believe they’ve hit a turning point after Luton win

That’s the man that we all know and love. Having not been incredibly consistent this season when it comes to being amongst the goals, either by scoring them himself or setting them up, Joe Lolley burst into life this afternoon in Forest’s victory over Luton Town, even if one of his efforts did have a […]
Read More
VITALFOOTBALL.CO.UK

Joe Lolley scores twice as Nottingham Forest come from behind to beat Luton Town and move within five points of the top two.
Read More
BBC.COM

Nottingham Forest 3-1 Luton Town: Joe Lolley at the double as promotion chasers come from behind 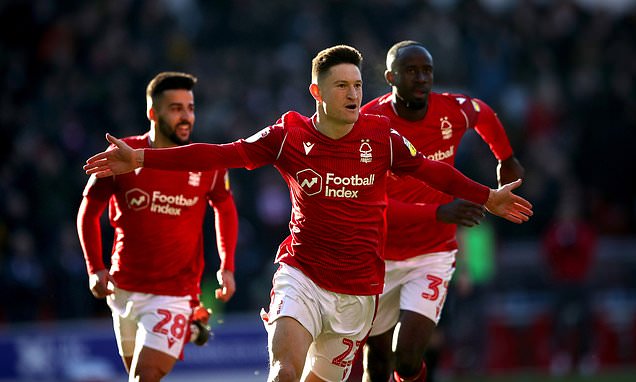 Joe Lolley kept Nottingham Forest's promotion charge on track with a stroke of good fortune and a spectacular winner at the City Ground.
Read More
DAILYMAIL.CO.UK

Nottingham Forest moved to within five points of the automatic promotion places in the Championship with a 3-1 win over Luton Town on Saturday. Despite going a goal down in the first half, Forest put in a dominant performance with Joe Lolley scoring twice at the City Ground. Luton had the better of the play […]
Read More
TALKSPORT.COM

At least someone is keeping the positivity going at St Andrew’s right now. Because it certainly isn’t coming from the fans based on these comments. Having finally stopped the rot with victory over Luton Town in their last outing, the Blues will be hoping to keep the momentum going in the coming weeks, starting with […]
Read More
VITALFOOTBALL.CO.UK

Luton Town's Championship relegation fight is of immediate concern to supporters, but the club's long-term prospects offer some solace as they moved closer to ending a 60-year wait for a new stadium this month.
Read More
SKYSPORTS.COM

Some Luton Town fans have been left delighted by the injury update that their player Izzy Brown has provided recently. Luton have not been on a good run of form in recent weeks. The newly-promoted Championship side has not won a single game in the league since their 2-1 win over Wigan Athletic in early […]
Read More
THISISFUTBOL.COM

“I just picked the best one”: Clotet hints at further rotation at key position – Report

It’s time for one of my favourite subjects. You really didn’t think I was going to let this story pass me by did you? When the teams were announced for the Luton Town game on the weekend, there was one very obvious change that had taken place. Having been in the starting eleven since late […]
Read More
VITALFOOTBALL.CO.UK

The head coach and defender were seen having an in-depth discussion on the pitch, just minutes after Blues defeated Luton Town 2-1
Read More
BIRMINGHAMMAIL.CO.UK

Walking into the opticians yesterday morning and then taking a seat in an already crowded waiting room, I noticed two elder gentlemen sat at the end of the row of seats. One of the duo looked very resplendent in a Luton Town scarf and it wasn’t long before I picked up on the conversation they […]
Read More
VITALFOOTBALL.CO.UK

I think it’s time we had a real talk about this player. Don’t worry, this isn’t going to be another Lee Camp out post, I’m sure there will be plenty of time to discuss him at points further down the line. In light of his recent red card against Luton Town, as well as some […]
Read More
VITALFOOTBALL.CO.UK

Doing great when your backs are up against the wall. That is something that has pretty much summed up Birmingham City in the last two games. Having seen Ivan Sunjic be sent off in the game against Blackburn Rovers last weekend, the Blues found themselves in a similar situation against Luton Town, this time with […]
Read More
VITALFOOTBALL.CO.UK

Revealed: What Pep Clotet told Harlee Dean in THAT video

The head coach and defender were seen having an in-depth discussion on the pitch, just minutes after Blues defeated Luton Town 2-1
Read More
BIRMINGHAMMAIL.CO.UK

Explained: Why Lee Camp is back in Birmingham City's first team

Pep Clotet went back to Camp in the FA Cup win over Blackburn last weekend - and opted to continue with him at Luton Town on Saturday
Read More
BIRMINGHAMMAIL.CO.UK

Here’s what stood out as Birmingham City battled to a much-needed 2-1 win at Luton Town thanks to goals from Lukas Jutkiewicz and Gary Gardner
Read More
BIRMINGHAMMAIL.CO.UK

The 28-year-old defender was dismissed in the closing minutes of the 2-1 win at Luton Town, after being shown two yellow cards
Read More
BIRMINGHAMMAIL.CO.UK

Blues won for the first time in seven Championship matches at Luton Town, with goals from Lukas Jutkiewicz and Gary Gardner giving them a 2-1 victory
Read More
BIRMINGHAMMAIL.CO.UK

Birmingham City head to Luton Town for a Championship showdown today as the transfer talk intensifies off the field
Read More
BIRMINGHAMMAIL.CO.UK

'Play like Messi': Some Spurs fans want linked target signed after his performance in NLD

Celtic have been credited with an interest in Hibernian winger Martin Boyle this January. ...
Read More
HITC.COM