Benatia: How Allegri betrayed me at Juventus The Morocco international gives an account of something of an unpleasant episode he had with the Italian tactician
Read More
GOAL.COM

The Moroccan will join the Blues ahead of the 2020/21 campaign from Ajax
Read More
FOOTBALL.LONDON The Blaugrana are reportedly eyeing the signature of the 22-year-old Morocco international
Read More
GOAL.COM

Both senior international players, despite each one's young age, 23-year German midfielder Suat Serdar and 22-year Moroccan one Amine Harit have reportedly been targeted by Barcelona FC, whose management might end up arranging a swap with Sc ...
Read More
TRANSFERMARKETWEB.COM

Soon to be Chelsea star Hakim Ziyech has recently discussed how Frank Lampard helped convince him to join the Blues. Ziyech joins Chelsea Ziyech has spent the past three and a bit seasons honing his craft with Dutch giants, Ajax. During that period the Moroccan has cemented himself as one of the top playmakers in […]
Read More
101GREATGOALS.COM

Ziyech: How Lampard convinced me to join Chelsea

Morocco international and Ajax Amsterdam star Hakim Ziyech feels that he made the right decision by agreeing to join Chelsea.
Read More
AFRICANFOOTBALL.COM

The Moroccan international is set to seal a summer transfer to Chelsea from Ajax
Read More
FOOTBALL.LONDON The Morocco star is moving to the Premier League with Chelsea, and won't play for the Amsterdam giants again
Read More
GOAL.COM The Moroccan playmaker will leave Ajax in the summer and is relishing the chance to make an impact in the Premier League
Read More
GOAL.COM The 27-year-old Moroccan international had eight goals and 21 assists for Ajax this season after posting 21 and 24 last campaign.
Read More
SOCCER.NBCSPORTS.COM

Msuva: Mainland Premier League needs to be upgraded for competitiveness The forward admits the Tanzania league has a long way to go to level with the Moroccan top-flight where he plays
Read More
GOAL.COM

HAKIM ZIYECH is confident that he will become a Chelsea player as planned on July 1, but has no idea when he’ll actually be able to play for his new club. The Moroccan became Frank Lampard’s first senior signing when he put pen to paper on a £37million move back in February, ahead of a […]
Read More
THESUN.CO.UK

Chelsea agreed a £36.6million deal with Ajax to sign Hakim Ziyech in February but there have been questions about when the Morocco international would be allowed to join the Blues
Read More
DAILYSTAR.CO.UK

What the Dutch FA's decision means for Ziyech ahead of £33.4m Chelsea transfer

The Moroccan international has agreed to join Chelsea on July 1 from Ajax
Read More
FOOTBALL.LONDON

AJAX - An Italian club after MAZRAOUI

Achraf Hakimi: Alexander-Arnold rival is wanted by “all the big teams in Europe”, says agent

Achraf Hakimi is the best right-back in the world alongside Trent Alexander-Arnold, according to the Moroccan’s agent. Hakimi, 21, has spent the past two seasons The post Achraf Hakimi: Alexander-Arnold rival is wanted by “all the big teams in Europe”, says agent appeared first on Squawka.
Read More
SQUAWKA.COM 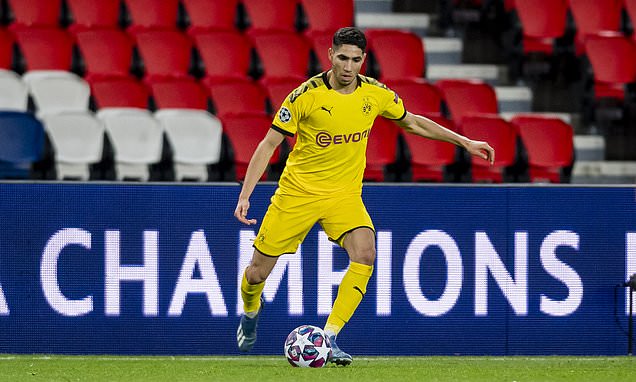 The Moroccan has thrived on loan at the Bundesliga side, providing 10 assists and finding the net three times in 25 league appearances this season.
Read More
DAILYMAIL.CO.UK

Hakimi the best right-back in the world with Alexander-Arnold & all the big teams want him, says Madrid defender’s agent The Moroccan's future has been the subject of much speculation in recent weeks, and his advisor has added fuel to the fire
Read More
GOAL.COM

'Genius', 'Underrated' – Many QPR fans rave over 'best attacking player we've ever had'

QPR have posted a compilation of all 19 of Adel Taarabt’s goals from the 2010/11 season on Twitter, which has left many fans of the west London club raving about his quality. The Moroccan playmaker produced surely one of the finest seasons in Championship history under Neil Warnock in 2010/11, scoring 19 times and providing […]
Read More
FOOTBALLLEAGUEWORLD.CO.UK The former Morocco international defender bid farewell to Turin in January 2019 after being edged towards the exits by Massimiliano Allegri
Read More
GOAL.COM The forward left for the Moroccan side late last year and has explained why the choice of moving north was very simple
Read More
GOAL.COM The Moroccan defender worked with the Catalan coach at Bayern Munich and has picked holes in his methods despite recognising him as one of the best
Read More
GOAL.COM

‘Ziyech will overcome challenges at Chelsea’ – Physicality not a problem for €40m star, say former coaches

Two men who worked with the Morocco international at FC Twente expect him to impress for the Blues and master the Premier League
Read More
GOAL.COM

Although it’s sometimes tough for fans to get excited about signing a young player ...
Read More
CAUGHTOFFSIDE.COM

Result: Real Madrid move to within two wins of title with Alaves victory