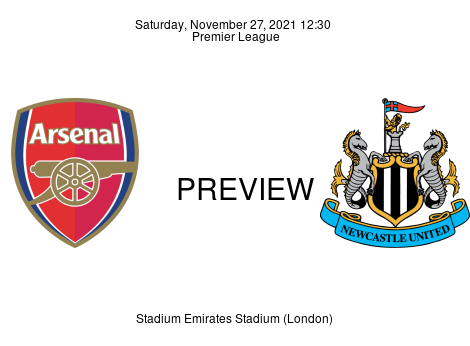 The Premier League fixture, Arsenal F.C. vs. Newcastle United F.C., kicks off at 13:30 (GMT+1) on Saturday, November 27, at the Emirates Stadium. Referee Stuart Attwell will try to be on top of the situation for the length of ninety minutes plus extra time while the assistants, Dan Cook and Harry Lennard, will lend a helping hand. Fourth official Graham Scott will be in communication with the crew from the sidelines while Darren England will be the VAR.

Preview Arsenal suffered a setback to their top-four ambitions last weekend after picking up a 4-0 defeat to Liverpool at Anfield with 53,000 spectators in the stands. A touchline bust-up between Arteta and Klopp ended with both managers receiving a booking and went on to shape the outcome of the clash. Liverpool stepped on the gas right after the incident but failed to convert two clear-cut chances. A few minutes later, a laser-guided free-kick from Trent Alexander-Arnold picked out Sadio Mane (39'), whose incredible header saw Liverpool take the lead. Arsenal were trying to play out from the back, but a loose pass ended up with Diogo Jota (52'), who rounded Arsenal's Aaron Ramsdale to see the deficit grow. Salah (73') struck for Liverpool's third before Minamino (77') put the game out of reach for Arsenal. We completely crashed, Arteta said after the game. We threw the game away, and that is the learning from today, he added. The defeat saw an unbeaten run of 10 games across all competitions come to an end. Arsenal remained in fifth place despite failing to pick up a point and return with the form: DWWWL. The Gunners have picked up 20 points after 6W, 2D, & 4L. Mikel Arteta aims for a quick return to winning ways ahead of this technically easier fixture against the Magpies. A 4—4—1—1 formation with Aubameyang playing at the forefront of the attacking end, with support from Lacazette, is expected.

Preview Despite his absence on the sidelines, Eddie Howe’s debut with the Magpies ended in a 3-3 draw against Brentford at St. James' Park. Although Newcastle avoided defeat, the club dropped a spot on the table, from 19th to 20th place, and remains the only team without a win in the Premier League this season. Their current run of 12 EPL matches without a victory is their longest since a 13-match streak without a win between December 2007 and March 2008. The Magpies have only 6 points after 0W, 6D, & 6L and the form: LDLDD, ahead of this fixture against Arsenal. Eddie Howe’s availability in the dugout remains in doubt, having tested positive for coronavirus last Friday. Assistant coach Jason Tindall is expected to step in once again. In either case, a 3—4—3 formation with Callum Wilson at the center of the attacking trio is anticipated for this fixture against Arsenal.